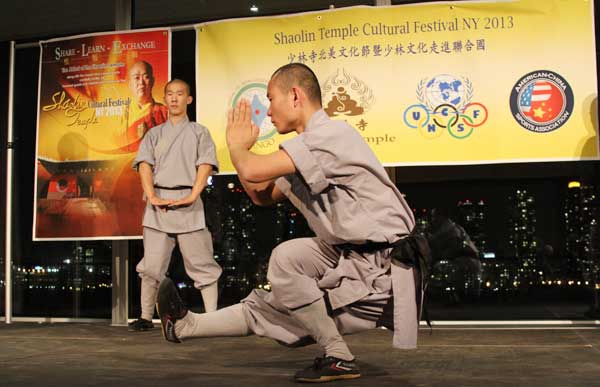 Shi Yongxin, the 30th-generation abbot of the legendary Shaolin Temple, led a cultural delegation to perform kung fu at the United Nations headquarters on Oct 9.

Shi Yongxin, the 30th-generation abbot of the legendary Shaolin Temple, led a cultural delegation to perform kung fu at the United Nations headquarters on Oct 9.

Performing traditional Chinese martial arts moves, the 18-member group wowed the audience, many of whom said they had never seen such feats before.

Shi introduced the Shaolin culture, saying Shaolin kung fu provides a ready way of sharing the wisdom of Buddhism and Shaolin's contribution to the peace and health of mankind.

He said that the Shaolin Temple, which was founded during the Northern Wei Dynasty (AD 386-534) and is the birthplace of Shaolin martial arts and Zen Buddhism Shaolin kung fu, was legendary around the world.

Steve Orlins, president of the National Committee on US-China Relations attended the event.

He recalled the legacy of "ping-pong diplomacy", and said he believed that exchanges like the Shaolin delegation's visit would strengthen the friendship between the two countries.

The appearance was co-hosted by the American-China Sports Association and Union National Culture &Sports Foundation.

"The success of tonight's event inspires us to develop sports and cultural exchanges with confidence and determination," she said. "We will continue our efforts to make a difference."

Since Shi took office, he has continually promoted Shaolin martial arts and the Shaolin Temple in general. Shi and Shaolin Buddhist monks have visited many countries and regions including Japan, South Korea, the US and Russia to spread Chinese traditional culture to promote friendship and understanding among foreign cultures.

The essence of Shaolin kung fu is the unity of Zen, which focuses on the combination of chan (mind) and kung fu(body).

The performance at the UN was part of the 2013 Shaolin Temple Cultural Festival.

As part of the festival, Shi gave a speech at the Memorial Church at Harvard University on Oct 8, where he described the fundamental aim of Buddhism which is to spiritualize the mind, seek wisdom, reflect on your motivations, live a simpler, healthier lifestyle, study the Buddha's teachings regularly, and keep practicing and learning from others.

Shi and the Shaolin cultural delegation will give a kung fu demonstration in Los Angeles on Oct 12.