The way of kindness 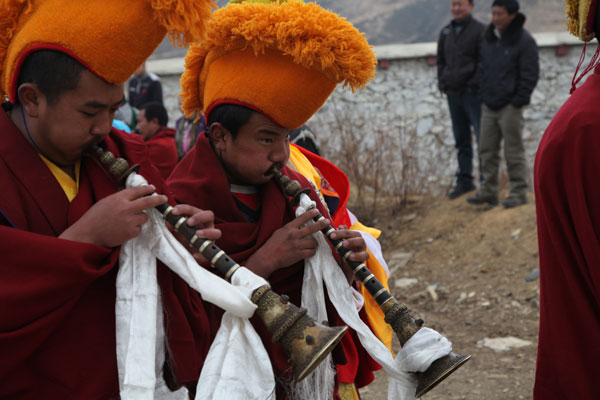 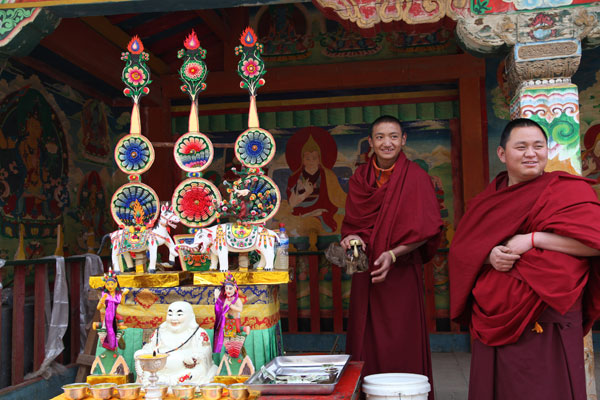 Tibetan monks debate the best way to help people who are suffering.

Clinging to a mountainside, the monastery painted dark red and golden yellow was clearly visible among a dense cluster of ethnic houses. The sound of repeated hand claps came from the yard of a pentagon-shaped wooden building as the debating class began, as it always does, at 2:30 pm at Dondrup Ling Monastery, a Buddhist foundation, in Deqen county in northwestern Yunnan province.

"For Tibetans, the meaning of life is to offer kindness and help to those who have suffered calamities - so what is the best way of doing that ... by chanting scriptures or making donations?" asked Tengpa Gyestang, a 17-year-old monk. His classmates then spoke for or against each viewpoint, using examples from classical Tibetan Buddhist scriptures to illustrate their arguments.

The monks debated back and forth, their traditional garments exposing their arms even as the temperature fell in late October. When the discussion ended, a show of hands was taken to decide how diligent each monk had been during class.

This is a typical afternoon for the 2,340 monks in the Diqing Tibetan autonomous prefecture, where more than 120,000 people - 73 percent of the population who claim a belief in religion - follow Buddhism, according to the Diqing bureau of religious affairs.

Dondrup Ling Monastery is an automatic destination for Tibetan Buddhists in Benzilan. The second-highest building, a towering wooden edifice, is where the monks study the scriptures; the classrooms are on the first floor and dormitories on the second. Even during the midday break, Tengpa Gyestang and his roommates sat in their dorm and held a heated discussion about the classics.

Seated on traditional yellow cushions, Tengpa Gyestang turned to his fellow monks and posed around 50 questions about the five classics books of the Gelug sect. The person who answered the question had to respond and then end their answer by clapping their hands.

Usually, young monks like Tengpa Gyestang have to study the classics for at least 15 or 20 years to obtain their Geshe degree - the highest level of attainment for Tibetan Buddhist monks. At Dondrup Ling, the seven Geshe-degree holders are regarded as the most learned and are visited by other monks for their views on questions concerning the scriptures.

Since the 1980s, the monastery has developed from a small temple to a community of hundreds of houses for the monks and the monastery's Living Buddha. In the view of the residents, the booming local economy and joint management system operated by the monasteries and local governments has resulted in a peaceful atmosphere where they can devote themselves to the study of Buddhism. 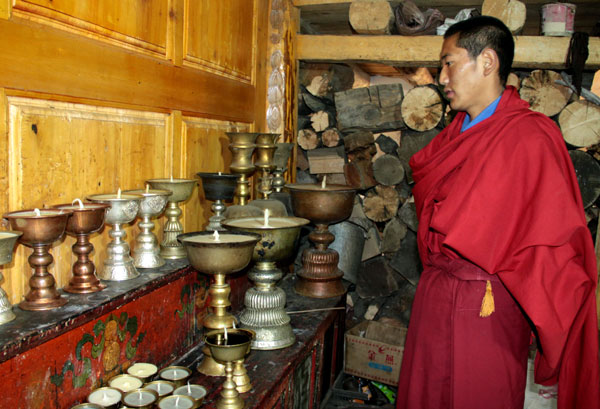 In the 10-square-meter dorms, each monk has one cabinet to store his books, meager clothing and other daily necessities. A painting of the Buddha Sakyamuni has been posted on the wall, "watching them (the students) strenuously study the classics", as the young monks put it.

Every day, Tengpa Gyestang and his classmates begin reading the classics at 7:30. They finish at midday, when they eat, before joining the debating class in the afternoons. "From the scriptures, I began to understand some of the fundamentals of Buddhism. My ambition is to obtain the Geshe degree in 10 years - there are so many profound elements to comprehend," said Tengpa Gyestang, who has been studying at the monastery for 10 years, along with his roommates.

Dondrup Ling Monastery, which was re-established in 1982, is the second largest in Diqing. It recruits boys from three townships in the county and is home to more than 400 monks and trainees, aged from 9 years old to 70. Monks who have already graduated from the class chanted the scriptures in the main hall where visitors pray to the Buddha and make donations. Tengpa Gyestang's classroom is located 100 meters down the main hall in a tranquil atmosphere designed to ensure that the scholars can devote themselves to their studies free from outside interruptions.

Every year, the monks are granted three months' leave. They can either stay at the monastery and continue their studies, or they can return to their home villages and chant for their neighbors. "Monks are revered in the villages because no one can replace them at crucial occasions such as funerals," said Drukpa Dentsin, headmaster of the class.

During the past three decades, Dondrup Ling's infrastructure and management has undergone a series of dramatic changes, said Lurung Gyaltso, the president of the monastery. In the early 1980s, a new temple was constructed to replace the existing building, which was on the verge of collapse. The Living Buddha drove a truck to ferry timber from the trees that had been felled by local ethnic Tibetans. At the time, there was so little food that the monks and laborers dreamed of corn cakes, but no one complained about the harsh conditions high on the mountain, according to Lurung Gyaltso.

"The monastery couldn't be built without the help of the neighboring communities," he said.

The five-year joint plan finally paid off in 1987 when a new temple, featuring an imposing main hall and dormitories, was finally opened. Some of the monks - each of whom was also given a two-story house - decorated the new temple with Buddhist paintings, according to a lama called Lobsang Dorje.

In Tibetan temples, believers routinely pray and donate money, and in return, the monastery calls on its disciples for donations and help for the residents in the event of natural disasters. After a series of earthquakes that began in late August, the Living Buddha at Dondrup Ling Monastery, has donated 20,000 yuan ($3,229) to the rescue and reconstruction operations.

Other establishments also helped: For example, the largest Tibetan temple in Yunnan, Ganden Sumtsenling Monastery in Shangri-La, the capital of the prefecture, raised 240,000 yuan for victim relief and held a special ceremony to chant sutras.

"As the economy has developed, the local Tibetans have become wealthier and so they willingly increased the size of their donations to the monastery," said Lurung Gyaltso. "Therefore, we have to do something if they come across difficult times."

The monks have also taken on the role of educating the locals about environmental protection. Diqing's ecosystem had deteriorated severely by the time a once-booming logging industry came to an end 15 years ago. Now, the monks emphasize the need to conserve nature and keep telling believers to cut down as few trees as possible to save the barren land and waning woodland on the mountains, according to Drukpa Dentsin. "Tibetan Buddhism aims for the peaceful utilization of natural resources and so we always urge our followers to follow the rules," he said. 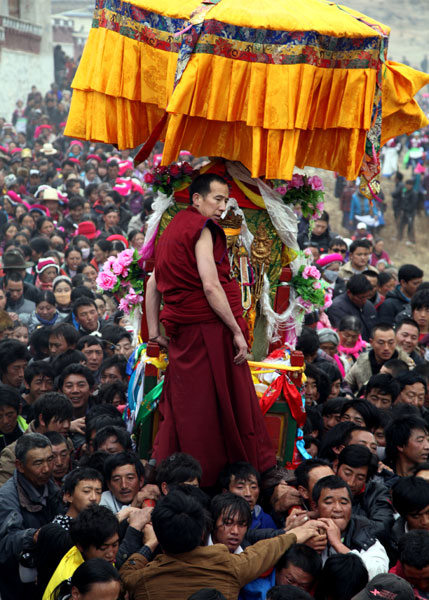 This 2012 photo shows pilgrims celebrating the Buddha-Greeting Festival at Ganden Sumtsenling Monastery in Shangri-La. The festival falls on the 15th day of the first month of the New Year, according to the traditional Tibetan calendar. Shen Bo / for China Daily

In 2012, Deqen's farmers saw their per capita net income rise by 25 percent to 4,222 yuan, but in many families, the tradition of sending children to the monasteries remains unchanged.

Diqing's 23 monasteries and 556 prayer sites are home to 2,430 monks, according to Tsering, the director of Diqing Religious Affairs Bureau. In 2007, Yunnan's provincial government enacted pioneering legislation on the management of monasteries in four major Tibetan population centers, including the Tibetan autonomous region and the provinces of Qinghai and Sichuan. The new legislation meant that officials were able to provide help in areas in which the monks have limitedexperience, such as insurance and public utilities, said Tsering.

Ganden Sumtsenling is the most prominent destination for Buddhist pilgrims in Yunnan and like Dongrup Ling it's a popular tourist attraction. Soon after the legislation was passed, the Diqing government established management bureaus at Ganden Sumtsenling and Dondrup Ling to oversee the lay affairs of the monasteries and their neighborhoods. Thus far, the prefecture has established management teams in nine major monasteries in the area.

The purpose of the bureaus is to serve the monks and better manage the neighborhood surrounding the temples, leaving the inhabitants free to pursue their studies, according to Tsering.

At Dondrup Ling, a committee of 12 highly respected monks is elected to govern the sacred area and the monks vote for a new committee every three years, said Lurung Gyaltso, who chairs the current committee.

A range of significant issues, such as the demolition or construction of new buildings, is currently under discussion by the panel, the Living Buddha, the management bureau and other local officials, he added.

Motorcycles and cars were once prohibited from entering the monastery grounds to ensure the monks enjoyed the solitude and serenity required for study and meditation. However, as the number of people living in the monastery increased, the use of vehicles became a necessary evil and so, at a meeting of all 400 monks held in 2010, it was decided to rescind the rule.

However, finding compromises that suit all four interested parties is sometimes a difficult task and tempers often fray. Ma Tao, director of the general office of Ganden Sumtsenling Monastery Management Bureau, said negotiations and compromise are required to establish close links with the monks.

In 2009, three halls with damaged walls at Sumtsenling Monastery were scheduled for reconstruction. According to Tibetan tradition, the halls should remain wooden structures, but the local construction standards stipulate that all new buildings must include a high proportion of concrete and steel to preserve the woodland in the ecologically sensitive area.

Architects from Kunming, the provincial capital, were invited to design the new structure, but the monks were insistent that the refurbished halls should remain true to their original design and materials.

At the monastery's request, the management bureau organized approximately 30 face-to-face meetings between the designers and the monks, but was forced to turn to Tibetan artisans for help when the meetings failed to bridge the gap. After 11 amendments, the monks agreed with the revision: Wood was used for the external walls, while the interiors were mad of concrete, thus preserving the original look of the buildings.

"In the end, both sides had to compromise to meet the demand of the monks and also the standards," Ma said. "That was our job, small but very important, because we have to respect the monks."

The construction workers, all non-Tibetans, were ignorant of local traditions and found it hard to cope with the waste that accumulated during the building work, so the Ganden Sumtsenling management bureau dispatched a deputy director called Dawang to the site. "Our mobile numbers were pasted on the wall from the outset. All the monks knew our phone numbers after several months of close interaction," said Dong Chongjun, a senior bureau official.

Tsering said most monasteries are located high on the mountainsides, necessitating a one-day round trip for visitors from Shangri-La. That means he has become the main point of contact for remote monasteries facing problems, he said. Lamas have also visited him when they encountered financial troubles.

"The best the bureau can do is to allocate 2,000 yuan in subsidies. However, our limited budget means the central and provincial governments must provide more financial support to help the monks," he said.

Since 2010, all monks in Diqing aged 60 or older have been included in the medical insurance and elderly subsidy programs. Tsering's bureau is now negotiating with insurance companies to get personal accident insurance for the same group.

"Almost all Tibetans are born to believe in Buddhism and so my subordinates actually show the monks great respect. It's part of my hope that they can make bosom friends with the monks and that everything will become easier," he said.