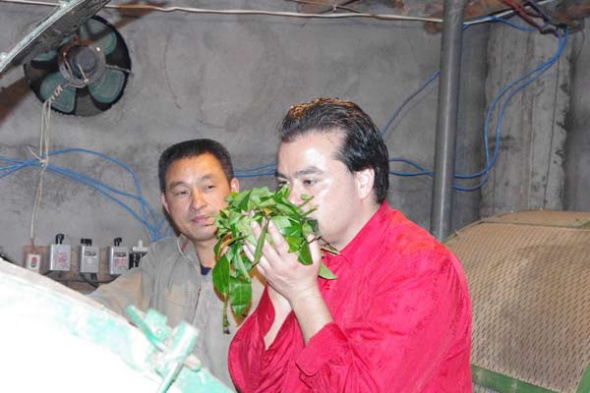 Obsessive viewing of martial-arts films as a teenager didn't turn Warren Peltier into a fighter-instead he became fascinated with tea, eventually moving to Fujian province to pursue his passion and write a book about the brew. Sun Li chats to the man who loves a cuppa.

China's alcohol culture was the first thing Warren Peltier came into contact with when he arrived in the country in 2006.

The bespectacled English teacher enjoyed the rounds of toasts, an essential part of doing business in China, in which the drinker empties the glass in one gulp. He soon learned the tricks to avoid getting drunk, such as putting fruit in his beer and spitting the alcohol out when no one was watching.

But it was another beverage that drew Peltier to the Middle Kingdom.

"The only thing my life is consumed with is Chinese tea," Peltier says. "Chinese tea culture is a journey that has taken me across continents."

In 1987, Peltier, who grew up near the LaCloche Mountains of northern Ontario, Canada, started to study Chinese in high school.

"As there were few books on the language, no Internet and no satellite TV, my way of improving my Chinese language skills was watching Shaw Brothers martial arts films (with Chinese subtitles)," Peltier recalls.

The then 16-year-old noticed many films had fight scenes featuring gaiwan, a lidded bowl used for steeping and drinking tea in China.

"The kung fu masters hold the bowl when fighting and nothing breaks and no water spills throughout the process. It's so cool," Peltier says.

The films prompted Peltier to develop an interest in the brew, and he started to buy various kinds of teas.

He stumbled upon Tieguanyin, a type of oolong that originated in Fujian province, and was deeply fascinated by its fragrance.

"It's way better than the teabag tea. Not pungent. You don't need to put sugar in it as it tastes sweet by itself," Peltier says.

He started to forage through book markets to find any kind of English book related to Chinese tea culture. He stumbled upon an English translation of The Classic of Tea, written by Lu Yu (AD 733-804) in the eighth century.

The more he read, the more Pel-tier was determined to visit China.

"Translation of the classic is awful. I wanted to find the original book and write a better English tea book to allow more Westerners to understand the profound tea culture of China," Peltier says.

But before moving to China, Peltier knew he had to learn the language well enough to converse.

Luckily, with satellite TV becoming more widespread in the 1990s, Peltier had greater access to Chinese television, everything from medical dramas to legal thrillers.

"Whenever the characters said something I didn't understand, I noted it down and looked it up in the dictionary and I repeated what they said on TV," Peltier says, adding he spent an average of five hours watching shows every day. 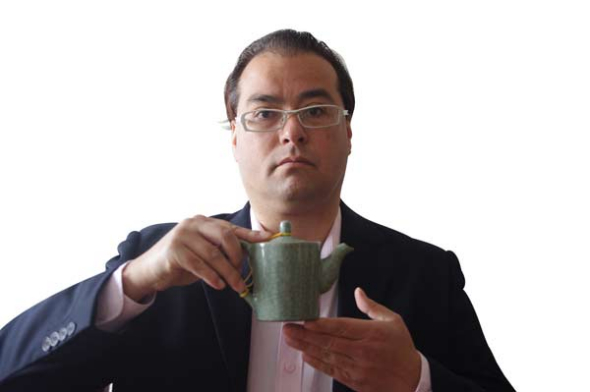 In 2006, Peltier finally arrived in Fujian province, an area known for its tea culture.

He worked in Longyan city as an English teacher, and was thrilled when he discovered a tea shop on almost every street corner.

"I dropped by a shop to sit and drink, and the tea they sold turned out to be Tieguanyin, which is floral and fresh," Peltier says.

"Later I bought a tea set in my house and made brewing, drinking and researching my daily routine," Peltier says.

A year later, Peltier moved to Fu-zhou, the provincial capital, with his wife, a Fuzhou native whom he met in Longyan.

Still working as an English teacher, Peltier continued to research tea in Fuzhou and was pleased to discover the city's trademark export, jasmine tea.

After a lot of research and gathering about 50 ancient tea monographs, Peltier began writing his own tea book in 2008.

His plan was to sort through his gathered material and combine it into a book centered on the technique and taste of tea practiced in ancient China.

During the editing process, he was struck by some interesting information. He was particularly taken with a technique in the Song Dynasty (960-1279) called "parting tea" in which tea brewers whisked the tea to create amazing images such as flowers and birds in the foam on the top of the broth.

Despite his passion for the subject, Peltier says reading ancient Chinese was difficult.

"The archaic Chinese is obscure and difficult and I had nobody to consult with," Peltier says.

"Once I asked my wife for help and she was like 'What the hell does this mean? It is ancient Chinese'," he recalls.

Peltier had to look up almost every term in an online dictionary of ancient Chinese. To maintain the accuracy as much as possible, he also repeatedly checked various documents and online archives.

Spending 12 hours a day writing, Peltier single-handedly completed the 160-page work, The Ancient Art of Tea, in 2011. It was published the same year.

He soon became something of a mini celebrity on the Fuzhou tea circuit, and became a regular guest at the province's high-end events related to tea.

In 2012, a tea company in Fuzhou selected Peltier as the image ambassador for its black tea product aimed at the international market and the Fuzhou Agriculture Bureau hired him as a consultant.

Peltier says his Chinese dream is all about tea, a dream from which he is yet to wake. His next project is a book about the philosophy of tea.

"I want to share with others my understanding of tea, of harmony and the respect for nature," Peltier says.