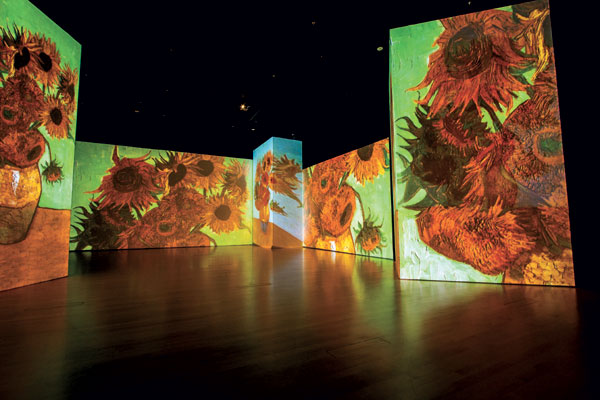 Vincent van Gogh's painting Sunflowers at the Van Gogh Alive show to be held in Shanghai and Beijing later this year. [Photo provided to China Daily]

A high-tech show takes the art legend's work to new dimensions in Shanghai and Beijing.
This year marks the 125th anniversary of the death of Vincent van Gogh (1853-1890), and a multimedia show in Shanghai and Beijing will celebrate the Dutch painter's short-lived yet prolific career. The exhibition also aims to challenge the audience's preconceptions and help viewers better appreciate the artworks.
Van Gogh Alive creates a multi-sensory experience. Within 35 minutes, it projects more than 3,000 high-resolution photos on 40 huge screens－and the columns and floor of the exhibition venues. The images display Van Gogh's canvases, sketches, drafts and letters written mostly to his younger brother, Theo.
The Australian exhibition-producing company Grande Exhibitions designed and premiered Van Gogh Alive in Singapore in 2011. Technicians dissected and magnified different parts of Van Gogh's paintings to showcase how he handled layers of colors. They also animated some details. For instance, they made alive the crows in Wheatfield with Crows, the landscape believed to be Van Gogh's last work. And they activated a train in one of his drafts, which runs on the 4-to-7 meter-high screens.
The show will begin with displaying a series of Van Gogh's self-portraits, and narrate in five chapters his whole life, both in the Netherlands and France. His signature works that appear include Starry Night, Sunflowers and Cafe Terrace at Night.
The underscore－symphonies by representative musicians of Van Gogh's time－will immerse the audience into the surroundings, which enlightened the painter in art while oppressing him in life.
Van Gogh Alive has been realized with Grande Exhibitions' development of a Sensory 4 system. A group of computers activate projectors and a sound system to compose "a symphony of light, color and sound", according to the company's website.

Grande Exhibitions so far has developed five Sensory 4 art exhibitions, which consists of Monet to Cezanne－The French Impressionists, Da Vinci Alive and 101 Inventions That Changed the World. The introduction of Van Gogh Alive caters to Chinese audience's growing fascination with Western oil paintings. A Claude Monet (1840-1926) art exhibition at the K11 Art Mall reportedly drew more than 300,000 visitors from March to June last year. Wang Zhongjun, the Chinese movie mogul who co-funded Huayi Brothers Media Corp, spent $61.8 million for a Van Gogh canvas,Still Life, Vase with Daisies and Poppies, at a Sotheby's sale in New York in November.
"Van Gogh lived a legendary life, with so many stories to tell," says Zhou Yi, the show's Chinese curator and a Shanghai-based independent producer who has developed TV shows and stage performances. She says the show will re-shape people's approach to appreciating fine art.
Chen Danqing, the Chinese art critic and painter, said that art exhibitions today have seen the breaking down of museum walls and national borders, because digital technologies access people to as many artworks as possible. "If Van Gogh were still alive, he would have been rather surprised to find his works being segmented, enlarged and minimized," he told a press conference for the show in Shanghai late last year.
Van Gogh Alive will be staged from April to early August at Shanghai Xintiandi, a recreational area featuring the city's stylish Shikumen housing. The exhibition venue will be supported by a base frame that is being built in an artificial lake.
"The Monet show at the K11 Art Mall proved to be a successful marriage of art exhibition and commercial property. It attracted not only art lovers but also those who don't go to museums or galleries. The sensation it caused shows that fine art is not limited to a small crowd, if it comes to people instead of making people coming to it," says Zhou Yi.
The show will then travel to Beijing's Joy City Mall for anther three months. That shopping compound held the open-air 100 Doraemon Secret Gadgets Expo that took the city by storm from April to June in 2014.
Hits：  UpdateTime：2015-01-13 15:45:43  【Printing】  【Close】
Previous：Pottery creation depicts New Year scenes   Next：Changing costumes over 60 years in China