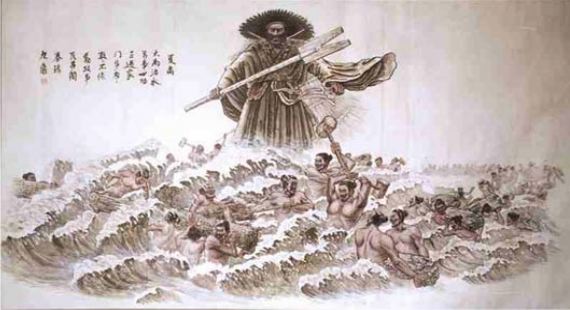 Besides nationwide extreme heat, the arrival of July also ushered in the flood season for most rivers in China. Every year the flood season presents as a huge challenge to Chinese peasants, during which they need to pay much attention to the weather changes and take many precautions, like clearing drains and building small dams.

Rivers have always been a double-edged sword for China, a nation with an exceeding long agricultural history. Rivers are widely used for irrigation and the Yellow River is even called " the Mother River ". On the other hand, when floods rapidly arrive, they can take away many lives and become the bane of agriculture. Therefore, the Chinese have complicated emotions towards their rivers, as they both admire and fear those fast-flowing streams. Through time, China has created several river gods who have eccentric tempers, sometimes being earnest and helpful, but sometimes being brutal and mean. Here we introduce some of them to you.

Gong Gong is an ancient god in charge of flooding, and is said to have a human head with red hair and a body of a snake. Many ancient books depict Gong Gong as a very cruel and irritable character who often wages wars against others. In Huainanzi ( 《淮南子》Huáinán zi ) , the war between Gong Gong and the emperor Zhuan Xu ( 颛顼 Zhuānxū ) is recorded. According to Huainanzi, Gong Gong started a war against Zhuan Xu because he intended to supersede Zhuan Xu and become the emperor. The fierce war ends with Gong Gong's failure. Out of rage, Gong Gong runs up onto Mountain Buzhou ( 不周山 Bù zhōushān ), one pillar of the heaven. After this clash the whole world becomes slant. In other versions of this war, Zhuan Xu is replaced by Zhu Rong ( 祝融 Zhùróng , the god of fire ) and Nv Wa ( 女娲 Nǚ wā, a Chinese goddess ) .

Another famous war of Gong Gong's was with Yu the Great ( 大禹 Dà yǔ ) . In the story, Great Yu Controls the Waters ( 大禹治水 Dà yǔ zhì shuǐ ) , Yu is leading his people in digging spillways of the Yellow River. Gong Gong then shows up and fights against Yu in order to prevent people from discharging the flood. Again Gong Gong fails and escapes death only after pleading Yu and promising him to cease causing floods in central China. This plot obviously shows the ancient Chinese wish of controlling the Yellow River, which was notorious for its devastating floods in ancient times.

Dragon Ying is a winged dragon who could generate clouds and bring rain. One of his stories recorded in Shanhai Jing《山海经》involves the war between Emperor Huang ( 黄帝 Huángdì, the leader of a tribe near the Yellow River ) and Chiyou ( 蚩尤 Chīyóu , the leader of a tribe near Yangtze River) . Dragon Ying takes Huang's side and brings heavy rain, and finally helps Huang kill Chiyou in a valley. Compared with Gong Gong, Dragon Ying enjoys a better reputation among people. It is said that when Yu the Great lead his people to discharge the flood, Dragon Ying helped Yu by using his powerful tail to dig drains.

River Uncle is not a real middle-aged " uncle " , but rather a handsome young man with silver hair and a tail of a fish. He lives in the Yellow River as a guardian. In the story Great Yu Controls the Waters, it is River Uncle who gives Yu the river map which becomes later becomes very useful in the process of discharging the Yellow River. In ancient China the Yellow River was frequently flooded, and people suffered many losses. With a lack of geographic knowledge, people used to believe that the floods were a result of River Uncle's rage. To gratify him, people decided to annually sacrifice one beautiful young girl as the bride of River Uncle. In some places this cruel ritual became an access for the greedy officers to solicit lucre from common people. A famous story called Ximen Bao Governs City Ye (《西门豹治邺》) records this phenomenon, in which the virtuous officer Ximen bao debunks the former officer and with a witch's trick, saves the beautiful girl.

Chinese river gods are said to be both generous and cruel. Next time when you are boating on a river, be more scrupulous, for the river gods might be just hiding in the deep water.