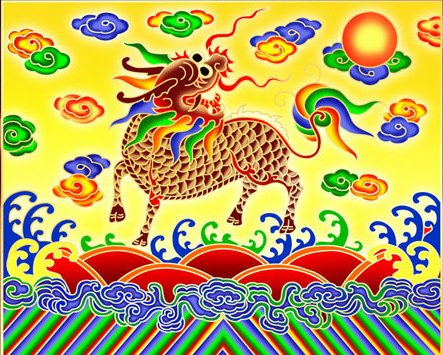 One of the most popular mythical creature, 麒麟 'qílín' is often referred to in the West as the "Chinese Unicorn". A male qilin is called 麒, whereas a female qilin is called 麟. This creature ranks second among the 'Four Benevolent Animals' (四灵 sì líng) of ancient China, along with the Chinese dragon, the tortoise, and the phoenix. A steed of the gods, qilins are considered a 瑞兽 (ruì shòu, serenity creature). The old Chinese saying goes: 天地诞生之初,飞禽以凤凰为首,走兽以麒麟为王 (tiāndì dànshēng zhī chū, fēiqín yǐ fènghuáng wéi shǒu, zǒushòu yǐ qílín wéi wáng), "When the world was born, the Phoenix led all flying animals, the Qilin ruled all chimerical creatures, both the first of these species."

Unlike the Chinese dragon, the qilin often appears with gods, and is a creature of the element of fire. It belongs to the heaven, but does not have wings to fly. It has a head that is that of a dragon, a body that is of a horse, and fish scales covering its skin.

According to legends, the qilin likes to help good people, especially those who are 孝 (xiào, fulfill filial duties) and do good deeds. Thus, it is also called 仁兽 (rén shòu, benevolent creature). The qilin protects and blesses those who host its statue, and can boost the host's career, solve dangers, fend of demons, and bring prosperity. However, a qilin may also pursuit evildoers, so people in the prostitution, gambling, and drug dealing industries would never put a qilin statue either in the office or at home.

Incidentally, when Zheng He came back from his voyage to East Africa in the Ming dynasty, he brought back a creature no Chinese has seen before: the giraffe. Those in Nanjing marveled at the giraffe, and deemed that this was the legendary creature of qilin. In Japan, the word "kirin" still refers to both the Chinese mythical creature and giraffes.

The qilin also may bring with it prophecy. Legend has it that on the eve of Confucius' birth, a qilin brought a jade scroll to his house, on which was written that Confucius had the virtue of emperors. Qilins often appear on ancient structures, as carvings or reliefs. Nowadays, representations of the qilin could still be found in many places, as statues and paintings, on furniture and decorations, as well as accessories and clothing.