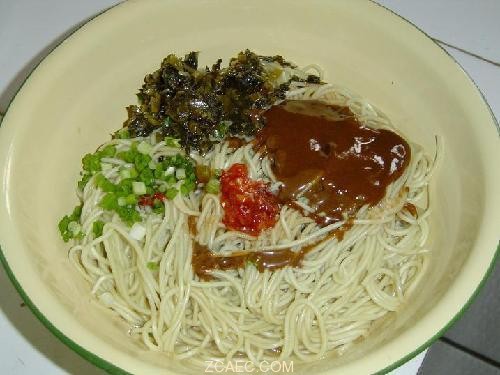 Hot Dry Noodles is a traditional snack in Wuhan with a long history of 80 years. It was said that in early 1930s,there was a person named Libao in Hankou District of Wuhan, who sold Cool Power Noodles and Noodles in Soup. One day , it was hot and there was a lot of noodles left, he was afraid the noodles became mold and turned worse. So he boiled noodles left, took it out , dried it on the chopping board, But he splashed sesame oil over noodles because of carelessness. A good idea came to his mind that Libao mixed and stirred noodles with sesame oil, then cooled it.

The next day, he warmed the noodles in hot water and put some spices in them, then sold them to the customers. Someone asked: what are they? Libao answered without hesitation, hot and dry noodles. That day the noodles were sold unexpectedly fast, thus a new species of food came into being. 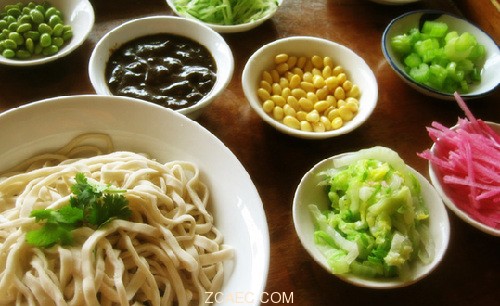 Zhajiangmian is a Chinese dish consisting of thick wheat noodles topped with a mixture of ground pork stir-fried with fried sauce, which is salty fermented soybean paste. Mix before eating. It is said that it tastes better with hand pulled noodles.

Thick flour noodles are boiled by themselves, and then raw vegetables and a thick meaty sauce are stirred in. The sauce is the real key to this meal: some old Beijingers guard their family recipes jealously.

In Beijing cuisine, yellow soybean paste is used, while in Tianjin and other parts of China tianmianjiang, hoisin sauce, or broad bean sauce may be used in place of the yellow soybean paste. Soy sauce can also be used instead of the soybean paste. Simplified Chinese:(炸酱) also means fried sauce, since the sauce itself is fried, although this homonym does not carry over into the Traditional Chinese term which describes the actual bean paste.

The following is a rough sketch for making zhajiangmian.

·Dice scallions and, if desired, garlic.

·Stir-fry the spring onions and garlic until they are slightly brown. (One could also add shredded tofu or soybeans to this step).

·Add meat to the wok. Stir-fry the ground meat until it is slightly brown. 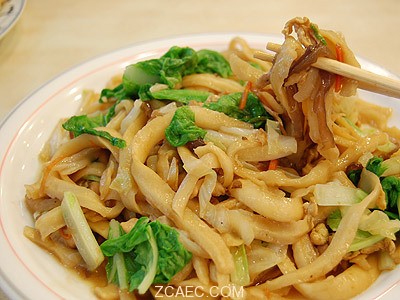 Originally from north China's Shanxi Province, knife-cut noodles are reputed to be one of the five most famous noodles in China, with the other four being Hubei's hot-dry noodles, Sichuan's dan dan noodles, Beijing's fried sauce noodles and Shandong's Yifu noodles.

The noodles are cut and cooked to order from a slab of wheat dough. The texture is slippery and chewy, and it is also fun to watch the noodle makers peel off the dough with a sharp knife and send the strips flying through the air into the boiling water without dropping any on the ground. 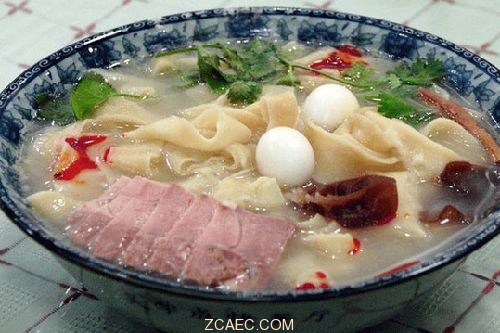 Henan braised noodles can be divided into three kinds: noodles with beef, noodles with mutton and noodles with seafood. Noodles with mutton is the most common variety. First, prepare a ball of wet wheat powder containing salt and oil and pull it into 2cm wide slices by hand, then boil them. After 3 minutes, pull them out and put them into a big bowl, add beef (mutton, or seafood), Chinese onion, a little kelp, and a little vermicelli made from starch. Finally, add some hot soup (traditionally made from the bones of goats).

Noodles, especially the mutton noodle (yáng ròu huì miàn 羊肉烩面) and beef noodle (níu ròu lā miàn 牛肉拉面) are must-eat in Zhengzhou. There are three good mutton noodle restaurants ("Heji", "Xiaoji", "Jufengyuan") with many locations, ask a taxi driver to take you the nearest one, and you will taste the best delicilous huimian in Zhengzhou. 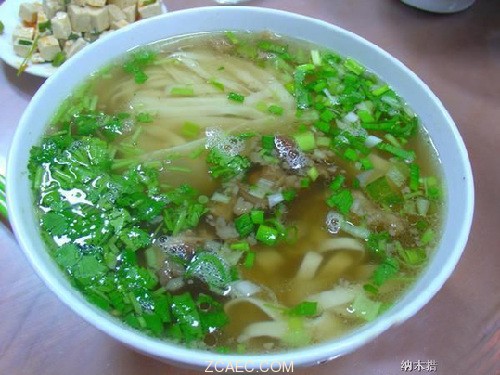 This dish from Lanzhou in northwest China's Gansu Province is known for its colorful presentation of white radish, red chili oil, green coriander leaves and yellow noodles in a clear beef broth.

It is said that this type of noodle, which is made by stretching and folding the dough into long strands, was invented by a Muslim named Ma Baozi in 1915. Customers get to choose the width of their noodles, ranging from super-wide to tiny, like angel hair pasta. The noodles are made to order, but don't fret - it only takes about two minutes. When you're in a new area and have no idea where to go for a nosh, look for a popular chain restaurant with a bull's head on its sign and grab a bowl. 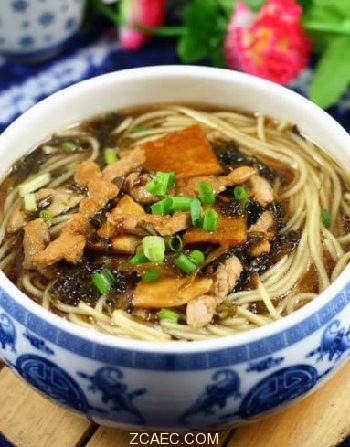 Pian Er Chuan (or : Noodles with Preserved Vegetable, Sliced Pork, and Bamboo Shoots in Soup“) is popular Hangzhou noodle loved from century ago, one of Hangzhou people’s favorites.

The staple food of people who live in the south China are usually rice, they are not fans of food made from wheat or corn, such as noodles. But Pian Er Chuan noodle gained their love, because it is cooked in south way. 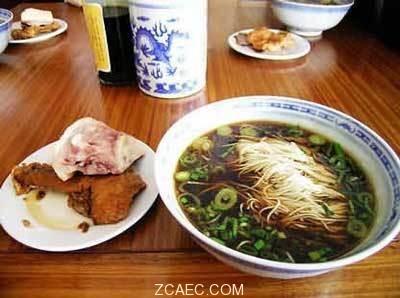 Aozao is the proud name of a Restaurant sitting on Tinglin Road of Kunshan City. On the front door hangs a plaque calligraphically inscribed with “Aozao Restaurant - Time-honored Store in China” by the famous calligrapher and painter Song Wenzhi, reminding you of its 148 years of history that stretches back to the 3rd year of Emperor Xian Feng of the Qing Dynasty (AD 1853). Initially named ‘Heavenly Aroma Restaurant’, it was abandoned by its then owner for poor business. A creditor took over and put it into the charge of Madame Chen Xiuying, a handy embroiderer and expert cook who listened attentively to her customers for improvement ideas and made quite a phenomenon of the Red Sauce Noodles (with spicy chilli condiments). Her efforts were amply rewarded by patrons who packed themselves like sardines in her then rather shabby little eatery and spread its good word around and beyond the town.

Its flavor and fame have sustained themselves through tumultuous decades of Chinese history and numerous renovations and makeovers, and now this Centenarian, with its mellowed youth, is enticing gourmets from around the global village.

There are many stories about how it came to be named Aozao (Ao=for noble or distinguished person, Zao= range or kitchen). One story goes that Qing Emperor Qian Long, one of a handful of beloved and most highly respected statesmen in Chinese history, was greatly impressed by the taste of the Red Sauce Noodle and decided to grace it with a new name, a usual honorary practice among important Chinese. So Aozao it became. Another more probable version goes that the grand restaurant today was a small dilapidated place with outrageously good business, which drew fire and ire from green-eyed competitors who ridiculed the Red Sauce Noodle as Auzo Noodle (meaning Noodle of foul filth in local patois). A scholar who lived nearby and often patronized was not quite pleased with all this rival-slandering and used his good knowledge of language to find two homophonic Chinese characters Aozao to give the restaurant a good name, and Aozao can also be taken to stand for profound culinary expertise. And thus it was named and the name spread afar. 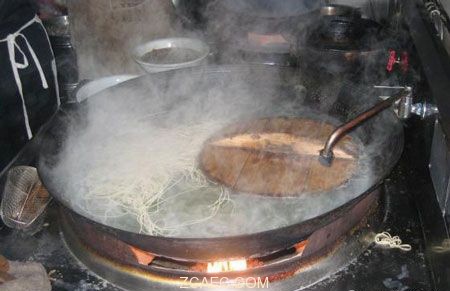 In ancient times, there was a family in Chinkiang. When the wife cooked noodles for her husband, the cover of the cooking pot often slipped into the noodles. However, the noodles turned out more delicious. Afterwards, the husband opened a noodle store with a partner. People loved to call their popular dish "pot covered noodles". 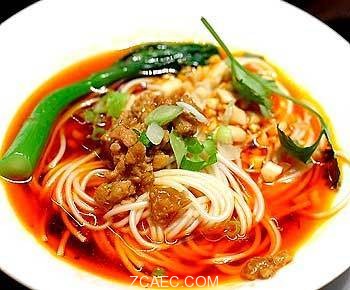 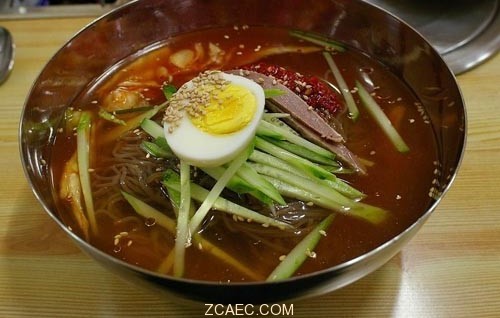 Anyone interested in Korean culture should know something about Yanji. It is a city located in Jilin province, very close to the border with North Korea, so the cold noodles in Yanji are as genuine as you're going to get in China.

Nowadays, cold noodles are well-known nationwide. The main ingredients are white flour, buckwheat flour, and starch. When you make cold noodles, put the flour that has been mixed into the special pot. Cook it and take it out of the pot and then cool it with the cold water. It is edible after adding the beef soup and chicken soup into it with pickles, peppers, beef slice, chicken meat bolus, apple slice, eggs etc.

Korean nationality used to eat cold noodles on the forth day of the first month of the lunar year. It is said that you will have a long life after you have the cold noodles at this day. Today, it is favored all year around.