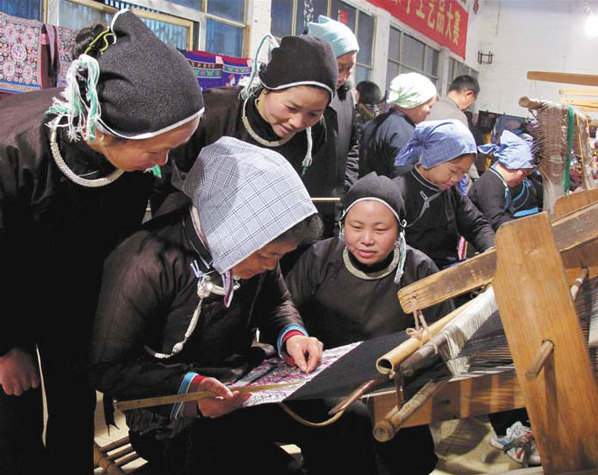 A Dong master shows her brocade technique to her peers. Yang Shaoquan / For China Daily 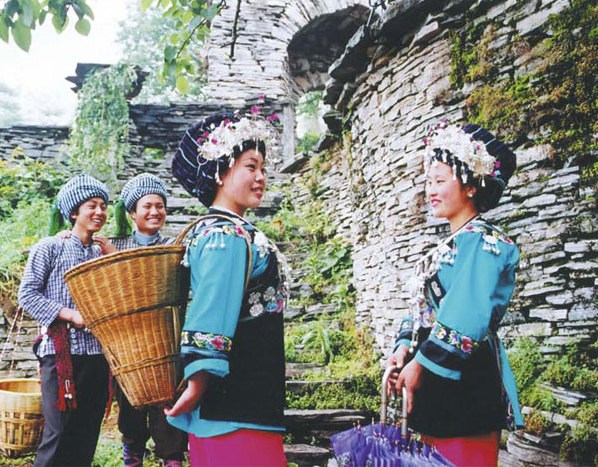 Hand-woven clothes, with rich colors and ornaments, are still popular among ethnic people in Hunan. Provided to China Daily

In the past, young girls in China had to learn needlework at a very early age because the ability was seen as the key to finding a good husband.

In most parts of the country, it seems the tradition has gone the way of the dinosaur, but in the remote areas of China's Hunan province, the tradition is still alive.

Ethnic peoples, such as the Tujia, the Miao, the Dong and the Yao, have dwelled in the west and south of Hunan for many generations. They have created several renowned textile crafts that are regarded as treasures of traditional Chinese culture.

For instance, there is a branch of the Yao ethnic group called Huayao - or "Flowery Yao" - because they are known for their special and colorful clothes as well as outstanding cross-stitch embroidery.

In a Huayao village located at the foot of a mountain in southwest Hunan, cross-stitch embroidery is still the most important skill for women.

Unlike machine-aided embroidery, the cross-stitch technique does not require a draft design or embroidery frame but only hands and skills.

Huayao women follow the veins of the hand-woven cloth and make embroidery according to a picture in their mind.

The women always carry their needles and embroidery work with them so that they can make cross-stitch whenever they have time.

They are often seen with their needles and cloth in front of a diaojiaolou, a wood-structured house over the water, on a stone near a brook or in the forests.

The hand-woven cloth in plain colors of blue, white or gray becomes art with aid from the needles of the Huayao women. Images of flowers, Mandarin ducks, golden sunsets and rainbows transform plain cloth into something extraordinary.

These are then made into scarves, cloaks, belts, skirt lace and underwear.

Women from the Miao and the Dong add even more romantic elements to their craftsmanship.

They not only make clothes for family members but also bed covers, handkerchiefs and pillows.

They even weave flower belts using colorful threads as tokens of affection.

"The Miao ladies are passionate and have a love of beauty. However in past periods of scarcity, they had to make every effort to make adornments by hand and make themselves look better," said Wu Jinglian, the only inheritor of the tie-dye technique in the county of Fenghuang.

"The pursuit of beautiful things is just one reason for the prosperity of ethnic embroidery," said Sun Wenhui, member of the Hunan intangible cultural heritage expert committee.

"The origin of the ethnic groups' colorful and picturesque clothing started with the demands of offering sacrifices during the long-past totem worship period."

For example, animal imagery is another important theme of the Huayao's cross-stitch work. The snake is one of the most widely used images. 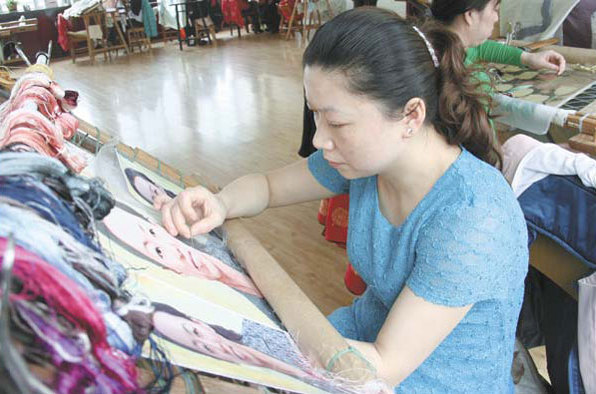 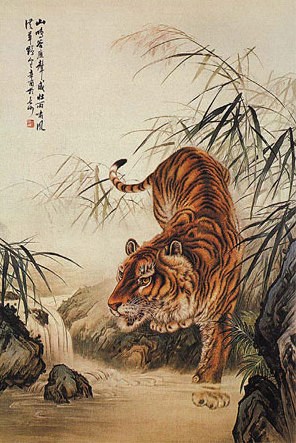 Incorporating such elements as Chinese painting and calligraphy, Xiangxiu embroidery has kept pace with modern fashions.

Dwelling in deep forests where snakes usually appear, the Huayao people worship this animal because they find that it has many skills that human beings lack.

The brocade used by the Dong people for sacrifice has the images of their totems, including a legendary creature that looks like a mixture of a dog and a dragon.

Brocade also plays an important part in the Tujia people's sacrificial ceremonies. Ever since the Shang Dynasty (1600 BC-1100 BC), the Tujia people have used delicate brocade to decorateshrines. They also wear brocade handiwork for their traditional dances.

The folk crafts are more than just techniques for making useful items. They also tell the stories of ancient civilizations.

Once a Tujia baby is born, the grandmother will give him or her a piece of brocade as a present. The infants will use bed covers made by brocade.

The Tujia girls learn the brocade skills and when they get married, their parents and relatives will give them brocade as a dowry. The more brocade bed covers a bride gets from her family, the more distinguished she is.

The color of the brocade changes with occasions, too. Brocade silently records the Tujia people's customs and lifestyles.

Among these traditional textile crafts in Hunan, the most renowned form is called Xiangxiu, or Hunan embroidery, one of China's four major embroidery forms. An art belonging to the Han people, it is perhaps the one that best follows the time and caters to market demands.

The art form comes from daily life and changes with the times, enabling Xiangxiu embroidery tosurvive and develop in the modern era, experts say.

The Shaping township in the suburbs of Changsha, Hunan's capital, is the cradle of Xiangxiu.

Embroidery is so popular there that locals say "every family has an embroider, and every village has an expert."

However, contemporary Xiangxiu has taken on some modern elements and become more fashionable and vivid.

In the past, the Xiangxiu used threads instead of pens to record history. Today, on the basis of traditional skills, the embroidery incorporates skills from traditional Chinese painting andcalligraphy.

Besides, the embroidery is better mounted and packaged to cater to market demands.

Compared to Shaping township, traditions are better preserved in the Miao and Tujia villages in the mountainous areas of western Hunan because these places are relatively more isolated from modern civilization.

However, since the traditional techniques require a very comprehensive set of skills that not many people master, just a few are preserved till now.

Now governments at all levels have realized the cultural importance of the traditional craft and are already working toward its preservation.

Several textile arts have been listed among the country's intangible cultural heritages.

In 2008, the Dong brocade, the Miao cross-stitch embroidery and the Miao embroidery were placed on the second State-level intangible cultural heritage list.

Besides embroideries, some local traditional clothing has become intangible cultural treasures, too. One of them is the Miao dress and personal adornment, which are known for their variable kinds and styles as well as delicate craftsmanship.

Xiao called on the young people to learn traditional folk techniques and pass down these cultural heritages to more generations in the future.

The inland province of Hunan is home to a number of ethnic groups, who have together created 99 State-level and 220 provincial-level intangible cultural heritage items, according to the provincial cultural department.