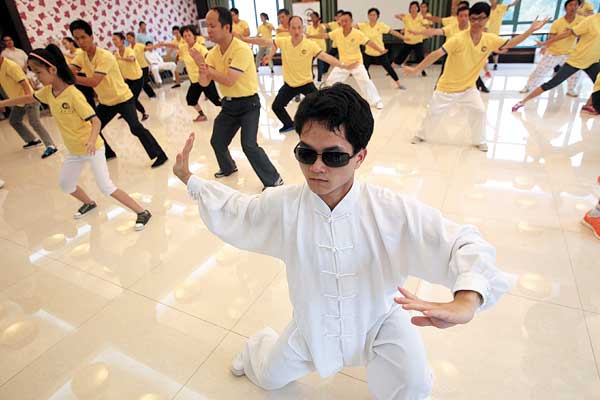 Li Langshu (above) and Zheng Yuankang (below) teach at the China Swordmen's Society in Beijing, a civil tai chi organization that gives free lessons to people who are interested in learning tai chi over weekends. Photos by Zhang Wei / China Daily

Lack of sight didn't stop two tai chi enthusiasts from learning their art - or sharing it with others.

There are two things that Li Langshu and Zheng Yuankang most-often crave: brightness and a compliment.

Zheng, born in 1992, lost his eyesight at the age of 13, and Li, born in 1991, became blind at 12. Now, as they work as tai chi teachers in Beijing, compliments have become more and more common for them.

"My job and life today gave me confidence that I haven't had since I lost my eyesight 10 years ago," Li says.

Li and Zheng now teach at the China Swordmen's Society in Beijing, a civil tai chi organization set up by Wan Zhouying, a tai chi master as well as Li and Zheng's teacher. The group not only gives free lessons to people who are interested in learning tai chi over weekends, it also holds training sessions for teachers in schools for the blind.

It took Li and Zheng two years to learn tai chi. Instead of following the teacher's usual instructions, Li and Zheng have to touch their teacher's body to feel each movement.

Li does not like wearing sunglasses. "Wearing sunglasses indicates that I am a blind person. I hate that. I do not want people see me differently," Li says, though he doesn't have a clear idea how he looks in sunglasses.

For that matter, he has a limited idea of his overall appearance, since he lost his eyesight at a young age.

"I was fat at that time, very naughty," he recalls, smiling. That is the image he has kept of himself to this day.

Li was a normal, naughty boy before the Lunar New Year of 2002. During the Spring Festival holiday, he and his friend were picking up abandoned fireworks in the countryside and wanted to re-light them. Both of his eyes were injured by an exploded firework, and he lost his eyesight in the following year.

He was in a terribly bad temper during the first year of his blindness. He was not allowed to go anywhere but forced to stay at home.

A masseur in Li's home village was sympathetic, and recommended the boy to a local massage-training school where visually challenged people could develop a skill to earn a living. One year later, Li came to Guangdong province with his elder brother and sister, and worked in a massage shop.

That was a miserable year for Li. "I was the youngest in the massage room, only 18. I was frequently blamed by customers because I was not professional, and customers asked for another massager," Li recalls.

"I was always afraid of complaints and being blamed," Li says.

Zheng, from a rural home in Cangzhou, Hebei province, had a similar miserable experience. After losing his eyesight because of illness, Zheng spent five years at home with his grandmother, who was bedridden. 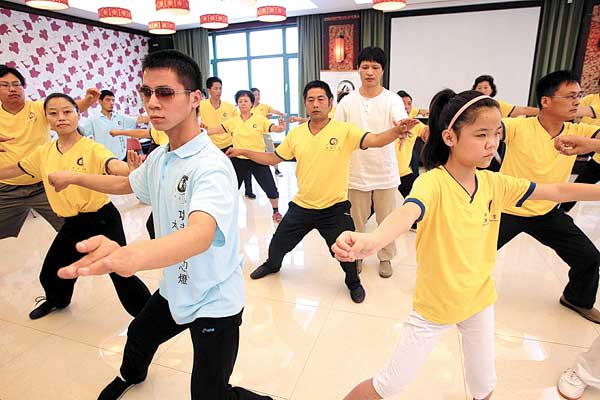 In the winter of 2010, Zheng's grandmother passed away. That was when Zheng decided to learn a skill to make a living. He learned about Zhangcheng School for the Blind in Hebei, where visually impaired people can learn massage skills for free. He immediately called the school for information and made the trip.

That was when he met Li, who also came to the school to learn massage skills. Shortly after the new semester started, Wan Zhouying was at the school and gave them a short introduction about tai chi and its origin, and told them that he would be at the school once a week to teach them tai chi.

The idea of teaching tai chi to visually impaired people was introduced to Wan by a friend who worked in the US embassy to China. "I had no idea how things would turn out at that time," he says. "I have never done this before, and this is like an experiment."

In fact, the first class Wan gave made him a little upset.

"Everything I have been teaching for years had to be changed," Wan says, noting that a common way to teach is to make comparisons and use metaphors so students will grasp the feeling.

"We might say, for example, to swing out your arm like a whip," he says. "But when it comes to blind people, this does not work at all. They have no idea what a whip is."

The first class took him more than two hours. Yet when he came to the school the following week, Wan was surprised that almost every student remembered what he taught in the first class - all of the movements.

"I was very surprised, and inspired," he says. "I then realized that these visually impaired students concentrate much more on their learning, because they have almost no extra curricular activities."

This is exactly the case for Zheng and Li.

"I want to perform better than my classmates and I want to be praised," Zheng laughs as he recalls. "I even get up and practice at midnight."

This August, 35 teachers from schools for the blind as well as rural primary schools all around China came to Beijing and joined Wan for 12 days of tai chi training. Li and Zheng worked as his teaching assistants.

Since the training program ended, Zheng and Li now live and study in the organization's offices in Beijing.

Li's fierce temper has relaxed greatly during the past two years since he learned tai chi.

"What will I do if one day the organization no longer needs me?" he says. "I may still need to rely on working as a masseur for living. But I will definitely keep practicing tai chi. This is something that makes me feel that life is beautiful and meaningful."