Guangzhou-based Sino-Africa Bridge Expo Service Co, which helps Chinese companies exhibit at trade shows in Africa, plans to put on an exhibition of its own in the Democratic Republic of Congo next year.

"Self-organized exhibitions are the way to go because they generate higher margins," says Pan Jiajia, general manager of the company.

The Democratic Republic of Congo has rich natural resources and a population of nearly 72 million, but it is also underdeveloped with few processing companies, he says.

Last year, Sino-Africa Bridge arranged for 23 companies to exhibit in Zambia, one in Angola and two in Kenya.

"There are many trade show organizers in Africa and a lot of opportunities," Pan says, adding in Kenya alone up to 50 shows are staged every year, fewer than 20 of which are international ones.

However, many of the shows are underdeveloped with few Chinese exhibitors, he says. 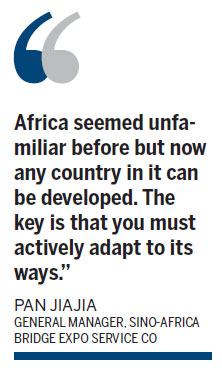 Shows of machinery, construction, infrastructure, mining, building materials, hardware tools, auto parts and pharmaceuticals produce high margins, because of a shortage of companies in those fields in the continent, Pan says.

Small and medium-sized enterprises, which find it hard to spot their customers because of inadequate Internet connections in many parts of the continent, are the major client-base of Sino-Africa Bridge.

"You must go there and build contacts. Some meet potential agents and make deals," Pan says, adding that shows in Africa usually attract visitors from neighboring countries.

While there are higher margins in self-held shows, the costs are also higher, says Pan, with many materials needed to put on an exhibition in short supply locally. Installation workers also need to come from China.

It usually takes a show three to five years to become influential. After that, the company should see rapid growth, Pan says.

"Africa seemed unfamiliar before but now any country in it can be developed. The key is that you must actively adapt to its ways," he says.

In 2012 China was Africa's largest trading partner for the fourth consecutive year, with a trade volume of $198.49 billion, or a 19.3 percent increase year-on-year, according to the Ministry of Commerce. The increase was 13.1 percentage points higher than China's overall foreign trade growth.

In April, the number of buyers from Africa at the 113th session of the China Import and Export Fair, China's largest trade fair, grew by 29 percent over the previous event held in Guangzhou in October last year, the largest growth among all continental categories, according to the organizer.

To further push Sino-African economic and trade relations and improve understanding of Chinese commodities by the African market, the Ministry of Commerce launched Brands of China Africa Showcase in Dar es Salaam, the capital of Tanzania, in July last year.

The second show will be held in Dar es Salaam and will be organized by the ministry and the government of Shanghai, as well as the provincial governments of Jiangsu, Zhejiang and Guangdong provinces.

The show this year will occupy 5,000 square meters, with 265 standard booths, an increase of 92 percent and 77 percent, respectively.

A total of 197 companies from 14 provinces and municipalities will showcase their products, with the show arena divided into four areas for machinery and automobiles, home appliances, electronics and solar power products, consumer products, and hardware, building materials, chemicals and medical products.