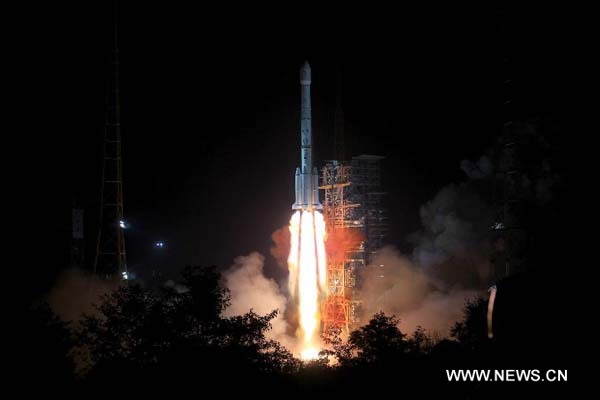 The Long March-3B carrier rocket carrying China's Chang'e-3 lunar probe blasts off from the launch pad at Xichang Satellite Launch Center, southwest China's Sichuan Province, Dec. 2, 2013. It will be the first time for China to send a spacecraft to soft land on the surface of an extraterrestrial body, where it will conduct surveys on the moon.

The probe's carrier, an enhanced Long March-3B rocket, blasted off from the Xichang Satellite Launch Center in southwest China at 1:30 a.m.

Chang'e-3 is expected to land on the moon in mid-December to become China's first spacecraft to soft land on the surface of an extraterrestrial body.

It is also the first moon lander launched in the 21st century.

The probe entered the earth-moon transfer orbit as scheduled, with a perigee of 200 kilometers and apogee of 380,000 kilometers.

"The probe has already entered the designated orbit," said Zhang Zhenzhong, director of the launch center in Xichang. "I now announce the launch was successful."

"We will strive for our space dream as part of the Chinese dream of national rejuvenation," he said.

Amid efforts to promote lunar probe campaign among the public, the Chinese Academy of Sciences opened a microblog account for the Chang'e-3 mission, attracting more than 260,000 fans who continuously posted congratulatory comments.

The probe's soft-landing is the most difficult task during the mission, said Wu Weiren, the lunar program's chief designer. "This will be a breakthrough for China to realize zero-distance observation and survey on the moon."

More than 80 percent of technologies and products of the mission are newly developed, he said.

The Chang'e-3 will lay a solid foundation for manned lunar orbit mission and manned lunar landing. China has not revealed the roadmap for its manned mission to land on the moon.

So far, only the United States and the former Soviet Union have soft landed on the moon.

Chang'e-3, comprising a lander and a moon rover called "Yutu" (Jade Rabbit), presents a modern scientific version of an ancient Chinese myth that a lady called Chang'e, after swallowing magic pills, took her pet "Yutu" to fly toward the moon, where she became a goddess, and has been living there with the white rabbit ever since.

Tasks for the moon rover include surveying the moon's geological structure and surface substances, while looking for natural resources.

A telescope will be set up on the moon, for the first time in human history, to observe the plasmasphere over the Earth and survey the moon surface through radar.

The lunar probe mission is of great scientific and economic significance, said Sun Zezhou, chief designer of the lunar probe.

The mission has contributed to the development of a number of space technologies and some of them can be applied in civilian sector, he said.

Chang'e-3 is part of the second phase of China's lunar program, which includes orbiting, landing and returning to the Earth. It follows the success of the Chang'e-1 and Chang'e-2 missions in 2007 and 2010.

After orbiting for 494 days and intentionally crashing onto the lunar surface, Chang'e-1 sent back 1.37 terabytes of data, producing China's first complete moon picture.

Launched on Oct. 1, 2010, Chang'e-2 verified some crucial technologies for Chang'e-3 and reconnoitered the landing area. It also made the world's first lunar holographic image with a resolution of 7 meters.

Currently, Chang'e-2 is more than 60 million km away from the Earth and has become China's first man-made asteroid. It is heading for deep space and is expected to travel as far as 300 million km from the Earth, the longest voyage of any Chinese spacecraft.

China is likely to realize the third step of its lunar program in 2017, which is to land a lunar probe on moon, release a moon rover and return the probe to the Earth.

The moon is considered the first step to explore a further extraterrestrial body, such as the Mars.

If successful, the Chang'e-3 mission will mean China has the ability of in-situ exploration on an extraterrestrial body, said Sun Huixian, deputy engineer-in-chief in charge of the second phase of China's lunar program.

"China's space exploration will not stop at the moon," he said. "Our target is deep space."

China sent its first astronaut into space in 2003, becoming the third country after Russia and the United States to achieve independent manned space travel.

Despite fast progress of the lunar mission, China is still a newcomer in this field.

The former Soviet Union first landed its probe on the moon on Jan. 31, 1966, while the United States first sent human beings to the moon in 1969.

About a day before the launch of Chang'e-3, India's maiden Mars orbiter, named Mangalyaan, left the Earth early on Sunday for a 300-day journey to the Red Planet.

Chinese space scientists are looking forward to cooperation with other countries, including the country's close neighbor India.

"We are open in our lunar program, and cooperation from other countries is welcome," he said. "We hope to explore and use space for more resources to promote human development."