Chinese are still spending more on shopping overseas than people from any other nation, with an average of $1,139 per trip despite the country's super-rich travel less often, according to a report.

The average spending per trip by Chinese travelers is 70 percent higher than the global average, according to the Hurun Report's Chinese Luxury Traveler White Paper 2013. 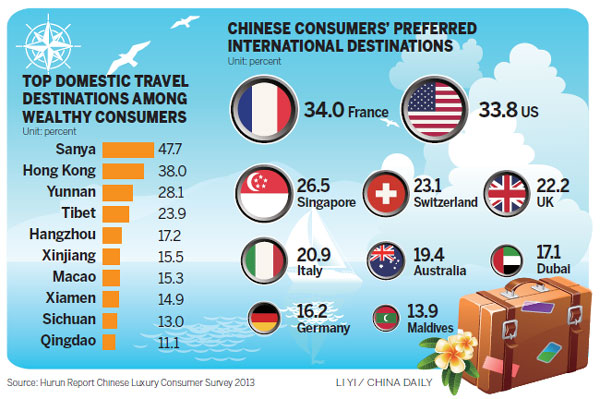 The paper, to be released on Tuesday by the Hurun Report in association with International Luxury Travel Market Asia, said it is the third consecutive year that Chinese tourists ranked first in the global shopping market.

Zhao Huanyan, a senior researcher at the Tourism Research Institute under the Shanghai Academy of Social Sciences, said: "It's not the best time for China to promote the luxury travel market ... especially given the fact that the central government is fighting corruption. In China, junket tours account for a large percentage of the country's high-end market."

Jiang Yiyi, director of the Chinese Tourism Academy's International Tourism Development Institute, said the fact that luxury brands cost about 30 to 70 percent more if bought in China compared with overseas encourages Chinese to spend more outside the country.

Statistics from the National Tourism Administration show there were 83 million Chinese outbound tourists in 2012, an 18.4 percent increase year-on-year. The country's outbound market is expected to continue to grow throughout 2013, with the number reaching 94 million.

Zhao Xijun, a 39-year-old businessman from Shanghai, said: "I've cut the number of annual family trips from four to two but the total length of the vocations has remained the same, at about two months. I want to stay in the same place longer to experience local life and to better relax from the daily routine."

The family's traveling expenses, including flights and accommodation, are about 500,000 yuan ($81,000) a year, according to Zhao.

About 43 percent of wealthy Chinese spend more than $5,000 per trip, excluding flights, with 11 percent of them spending an average of $10,000, the report states.

Hua Li, marketing director of HH Travel, a high-end luxury travel agent, said the average spending on travel by the company's clients last year was about 100,000 yuan each despite the country's high-end travel market still being in its infancy.