BEIJING -- China's consumer price index, a main gauge of inflation, grew 2.1 percent year-on-year in May, down from 2.4 percent in April, the National Bureau of Statistics said on Sunday. The NBS attributed the slow-down in growth mainly to falls in vegetable prices, which shrank 13.8 percent in May from April.

The rise is below the market forecast of around 2.5 percent, according to Wang Jun, analyst with the China Center for International Economic Exchanges, a government think tank.

In May, food prices, which account for nearly one-third of the weighting in China's CPI, increased 3.2 percent year on year, NBS data showed.

On a monthly basis, the CPI in May edged down 0.6 percent from April, compared to a rise of 0.2 percent in April from March.

China aims to hold this year's consumer inflation at around 3.5 percent.

China's producer price index, which measures inflation at the wholesale level, fell 2.9 percent year-on-year in May, the National Bureau of Statistics announced on Sunday. 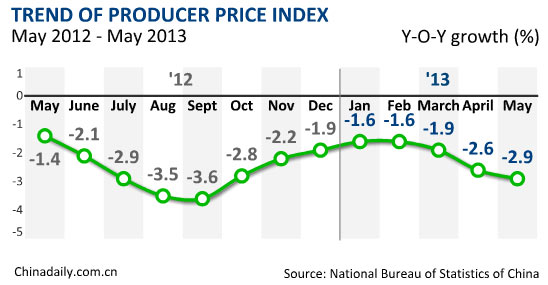 The figure marked a further drop of 0.6 percent from April's, according to data released by the NBS. For the January-May period, the PPI fell 2.1 percent.

The factory price of production materials dropped 3.8 percent, contributing 2.88 percentage points to May's PPI. Excluding the carryover effects from last year, new prices only contributed 0.8 percentage point to the general PPI of May, according to the NBS.

The decline of the PPI last month was in accordance with a three-percent drop of an index tracking the purchase price for industrial producers, according to the NBS.

The PPI data came along with a 2.1-percent rise in inflation in May, which eased 0.6 percent from April. Retail sales grew 12.9 percent year-on-year to 1.89 trillion yuan ($306.8 billion) in May, picking up from the 12.8-percent rise seen in April, the National Bureau of Statistics said in an online statement.

The growth was slower than the 14.5-percent target the government expects for the full year.

In breakdown, the catering sector reported a 9.2 percent year-on-year rise in revenues, quickening from the 7.9-percent gain recorded in April, while sales of other consumer products increased 13.3 percent.

After being adjusted for inflation, retail sales went up 12.1 percent last month.

After years of rapid growth generated by investment and exports, China has been looking to shift the focus of its economy to consumption to boost growth. The growth rate slightly decelerated by 0.2 percentage points compared to the first four months, according to data released by the NBS.

Investment in the nation's central regions witnessed rapid growth of 23.9 percent, followed by 22.7 percent in the west and 19 percent in east China.

Investment in property development rose 20.6 percent to 2.68 trillion yuan in the January-May period, down 0.5 percentage point compared to the first four months, the data showed.

Meanwhile, investment by private companies increased 23.8 percent year on year to 8.38 trillion yuan in the first five months, the data showed. The figure accounted for 63.9 percent of the nation's total fixed-asset investment during the period.