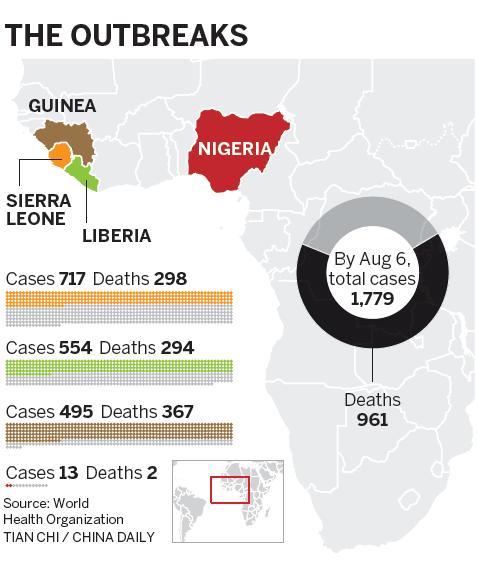 It is the first time Beijing has offered overseas assistance in response to a public health emergency.

Li Qun, emergency response chief at the Chinese Center for Disease Control and Prevention, said the move will help with China's own Ebola response.

"Our experts' communication with local frontline medics for Ebola control and treatment will help with our response to the virus at both clinical and future research sites," he said, adding that China has never had an Ebola outbreak or used the virus strain for research purposes.

The teams left on Sunday night and will travel to Guinea, Liberia and Sierra Leone.

A statement issued by the National Health and Family Planning Commission on Sunday said each team comprises an epidemiologist and two specialists in disinfection and protection. Team members are from the China disease control center and other institutions.

Sun Hui, an epidemiologist on the Guinea mission, said the tasks include information and technical support for China's embassy and consulates there on distribution and use of relief supplies, and training local Chinese on disease response.

The aid was expected to arrive on Monday or Tuesday, Ministry of Commerce spokesman Sun Jiwen said.

Sun Hui said each team will work for three days mainly with staff members from China's diplomatic and consular missions.

"The mission is aimed at helping to curb the further spread of the virus in the affected countries and enhancing the protection of Chinese nationals there against the outbreak," he said.

The disease control center has taken out insurance policies for the medical teams.

Feng Zijian, deputy director of the center, said, "Given that they are public health experts, they won't work on the clinical side, which involves contact with the patients."

Song Shuli, a spokeswoman for the Health and Family Planning Commission, said a training session was held on Sunday to help prepare the team.

Li Zhenjun, an expert going to Sierra Leone, the hardest-hit country, said information on biosafety, African social customs and preventive advice was given during the session.

On Friday, the World Health Organization declared the epidemic an international health emergency, advising countries to be prepared to help with the evacuation and repatriation of nationals, including health workers who had been exposed to Ebola, which has killed nearly 1,000 people to date.

However, Feng said China has no plan at the moment to withdraw its nationals from the countries affected.

Chinese medical teams from Beijing and Heilongjiang and Hunan provinces are continuing to perform their duties in the three countries.

Wang Yaoping, director of the medical team in Sierra Leone, said, "We won't withdraw under any circumstances and will more actively participate in combating Ebola here."