How many hurdles must youth clear?

China's youths are getting increasingly frustrated, and the government has to take effective measures to address the issue in order to maintain social peace.

A significant percentage of today's youths are well educated, tech-savvy and hooked to global culture, and an increasing number of them now study overseas. However, there is a real divide between China's urban and rural youths. The massive expansion in higher education in China has mainly benefited young people living in cities. In the countryside, the quality of schools is inferior and access to computers difficult.

Moreover, with an income gap between urban and rural residents of 4-to-1, people living in the countryside have far fewer resources - and thus are more likely to be condemned to poverty. 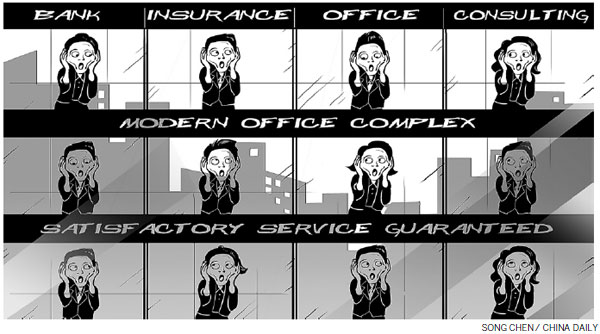 That does not seem so terrible given that two-thirds of China's youth population live in cities. There is a crucial distinction to be made, however: Half of these young people, in effect, are full urban residents, thanks to the residency status of their parents, while the other half isn't so lucky. Under the hukou (household registration) system, the unlucky half lacks that right - and is, in effect, an urban underclass.

The fact that half of China's rural youths have moved to cities does not really help when it comes to the most important tool of self-advancement - education. These youths may be living in cities, but they still hold a rural hukou, which denies them access to education, healthcare and other social services in their place of residence. Migrant workers not being able to access to such services in cities is one of the factors driving China's widening inequality.

The government has announced that it would loosen the hukou system over time, but we will have to await the outcome. One reason for skepticism is that relaxing the hukou system could have adverse effects on the budgets of city governments and many urban residents are not keen to share their privileges with migrants from rural areas.

This underclass generally ends up doing semi-skilled jobs in the informal sector. With few rights and little protection, these people are often denied their labor rights. The reason why this is of great concern not just to China but also the world is that today's young workers are less docile than their parents. As China's pool of surplus labor dries up, younger workers do not shy away from protesting against the abuse of labor rights, as evident in the growing number of labor unrest.

So, what is the dream of China's urban underclass? Quite simply to become permanent urban residents and live with dignity.

Life doesn't seem all that wonderful for young people at the top of the ladder either. Most come from one-child families, and are under immense family pressure to excel in education and land a good job. But despite being better educated than the earlier generation, they still find it difficult to get employment because of the tough competition in the job market.

Driven by prestige, all families want their children to go to universities rather than vocational institutes. As a result, the unemployment rate among graduates is much higher in China than the overall jobless rate.

The strict family planning policy has generated a competition for wives, too. The skewed gender ratio the policy has led to means young men have to get a job, a car and an apartment to get married. Also finding a suitable wife in China's male-dominated society has become more complicated because girls are performing better than boys in school, and many Chinese men still prefer women less educated than them as wives. If, for instance, "A-grade" (in terms of education) men marry "B-grade" women, and "B-grade" men to marry "C-grade" women, where does that leave "A-grade" women and "C-grade" men?

The plight of youths is just another element of the great stress afflicting Chinese society. Although the government is taking some measures to address the frustrations of the youths, they could test China's socio-political stability as economic growth is likely to slow down in the coming years. To address the serious problem, China's leadership needs to carry out an intensive study and implement the resultant suggested measures.