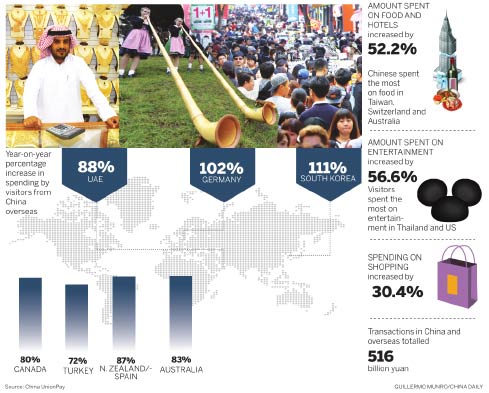 Travelers fork out for entertainment, dining and hotels during vacation

Chinese consumers' spending patterns are changing and they are now more likely to splash out on entertainment, dining and accommodation during the seven-day National Day holiday.

This trend has emerged from the payment data of outbound travelers during the vacation.

Spending on dining and hotels rose by 52.2 percent year-on-year during the break from Oct 1 to Oct 7, while expenses for entertainment and leisure activities increased by 56.6 percent. Spending on shopping rose by 30 percent.

Outbound Chinese travelers' spending increased by 9 percent year-on-year and the number of transactions rose by 36 percent.

Spending on dining by these travelers rose the most in China's Taiwan province, Switzerland and Australia, while Thailand and the United States recorded the fastest growth in spending by Chinese on entertainment and recreation.
The data were collected from sales points and other payment channels among merchants worldwide on UnionPay's global website, which covers more than 140 countries and regions.
"The data show that outbound Chinese consumers are focusing more on what they gain from their travel experiences instead of what they buy at their destinations. This shift shows a heightened awareness of 'quality time' during their holidays," said Chen Han, a data analyst at China UnionPay.
Kim Joon Hee, a restaurant manager in Insadong, a tourist attraction in Seoul, the South Korean capital, said his restaurant catered for more than 100 Chinese each day during the holiday. Spending by each customer averaged about $90, a year-on-year increase of around 40 percent.
"In the past, shopping was the top priority for Chinese visitors to the city, but now they want to savor fine dining and experience Korean food as a part of their travel experience, rather than merely shopping at duty-free stores," Kim added.
South Korea topped the outbound destinations for travelers from China during the holiday, attracting around 160,000－up by more than 40,000 from last year.
Their spending in South Korea during the break rose by 111 percent year-on-year, followed by travelers to Germany (102 percent), the United Arab Emirates (88 percent), New Zealand and Spain (87 percent) and Australia (83 percent).
Spending by Chinese visitors in Canada rose by 80 percent year-on-year, while Turkey saw a 72 percent increase and the US a 64 percent rise.
Wang Yichun, a 29-year-old high school teacher from Shanghai, said she spent about $400 on a hot air balloon flight during a holiday in Turkey.
"The point of traveling abroad is to do different things to what you normally do at home. I think entertainment and recreation are the most important and I am willing to spend money to have fun," Wang said.
Feng Yun, marketing director at China Travel Service's head office in Shanghai, said, "Chinese consumers are showing great interest in exploring destinations far from home."
The number of outbound Chinese travelers has increased rapidly in the past few years and will continue to do so, according to a recent report by the World Tourism Organization.
In 2003, spending by such travelers accounted for only 1 percent of the global market, but the proportion is expected to grow to 20 percent by 2023.
Outbound Chinese travelers will make more than 100 million trips this year, spending more than $100 billion, the report said.
Hits：  UpdateTime：2014-10-09 10:08:27  【Printing】  【Close】
Previous：China vows enhanced ties with Somalia as embassy reopens  Next：Egypt cabinet forms committees to enhance ties with China, Russia