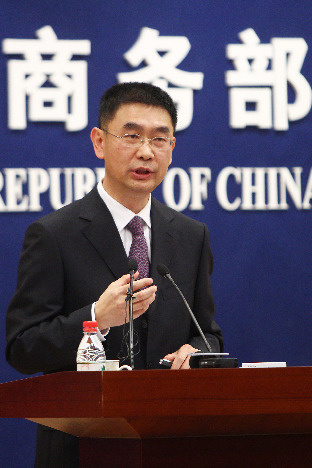 Ministry of Commerce spokesman Yao Jian speaks at a press conference in Beijing.

China's investment in Africa has increased 30-fold since 2005, a commerce official said Thursday.

According Ministry of Commerce spokesman Yao Jian, who spoke at a press conference in Beijing Thursday, the investment was divided amongst 2,000 firms in 50 African countries.

In 2009, China replaced the United States as Africa's largest trading partner. Trade between China and Africa totaled $166 billion in 2011, while American trade totaled $95 billion, according to a Guardian report.

China's growing investment has spurred the United States to engage more competitively with Africa. The U.S. and Africa signed the African Growth and Opportunity Act in 2000, which expired at the end of last year.

During a June 26 to July 2 trip to Africa, U.S. President Barack Obama pledged to invest in a multibillion dollar power project on the continent. China announced in 2011 that it had waived tariffs for 97 percent of exports from Africa's least developed countries. Yao said China has been always the largest importer for Africa's least-developed countries, accounting for 25 percent of those countries' export volume.

It is also noteworthy that Nigerian President Goodluck Jonathan's recent visit, during which Chinese President Xi Jinping announced the finalization of a $1.1 billion loan from China to Nigeria. Nigeria has Africa's second-largest economy. It is also Africa's largest oil-producer.

"Through multi-way cooperation, [like the] China-Africa Cooperation Forum, China has facilitated Africa's participation in the global economy and increased its access to benefits of global trade,"said Yao.

He added that China has donated to the WTO since 2008 to provide trade assistance to Africa's least-developed countries, which, Yao said, allowed China to help expedite African countries' admission to the organization.