BEIJING - China's gross domestic product growth slowed to 7.5 percent in the second quarter of 2013, down from 7.7 percent during the first quarter, data from the National Bureau of Statistics (NBS) showed on Monday.

Growth in the first half of the year stood at 7.6 percent, which is in line with market expectations and was above the government's full-year target of 7.5 percent.

"China's economy has maintained a steady growth," Sheng Laiyun, a spokesman for the NBS, said at a press conference.

According to the NBS data, the GDP totaled 24.8 trillion yuan ($4 trillion) in the first six months.

"Major economic indicators are still within reasonable ranges as expected, but the economic environment remains complex," Sheng said, adding that the market should play a better role to bring out the economy's intrinsic vigor.

The latest GDP figures headed a string of other data showing a continuous slowdown in the world's second-largest economy after China's full-year annual growth eased to 7.8 percent last year, its weakest since 1999.

Industrial output increased 9.3 percent year on year in the first half of 2013, while the growth of fixed-asset investment, a measure of government and private spending on infrastructure, stood at 20.1 percent during the period, down 0.8 percentage point over the first quarter of the year.

Retail sales, a key indicator of consumer spending, increased 12.7 percent from a year earlier. The growth rate picked up by 0.3 percentage point from the first quarter, according to the NBS. 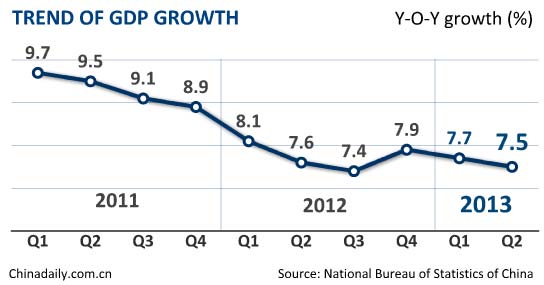