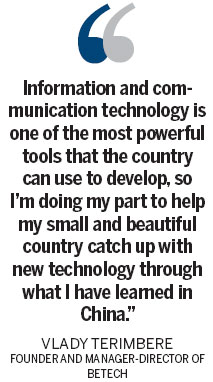 When African countries made the massive leap into the Wi-Fi era - many having skipped the cable age - Vlady Terimbere spotted the vital role that information and communication technologies would play in future development.

Now, he is ready to apply what he has learned in China.

"I'm working at BTECH based in Burundi, where I'm a founder and also the manager-director," he proudly declares. "I am also a software engineer, taking responsibility for designing, developing, and implementing management information systems for clients."

Terimbere graduated last year from Nanjing Aeronautics and Astronautics University, in the capital city of East China's Jiangsu province, with a bachelor's degree in software engineering and management.

Before he began the course in 2008, he had to spend two years at the Beijing Language and Culture University learning Chinese.

He decided to go to China to study because he was attracted by its rich history and culture, which he had learned about from every available source in Burundi.

"And given that China will be a commercial super power in the world in the days to come, that was also a plus when I made my choice," he says. "As for my major, I thought the way China was developing in the area of technology was fast and more tangible for African countries."

The warm hospitality he received from Chinese people during his studies, he says, furnished him with other ways to understand the world.

"Their rich culture was incredible, but more importantly to me as a student, China's level of education was way higher than I expected," he says.

He was impressed by how the Chinese managed so many things using new Internet technologies.

"You can actually get everything you want, anywhere, anytime by online shopping via websites such as Taobao.com," he says, adding that this should be the future for Africans' shopping experience.

"Burundi is still a developing country and the digital divide is one of the main problems the country is facing but, of course, it is a promising industry," he says. "Information and communication technology is one of the most powerful tools that the country can use to develop, so I'm doing my part to help my small and beautiful country catch up with new technology through what I have learned in China and at the university."

The African Union has called for its member nations to profit from the possibilities offered by the IT and communications industry, believing it to be one of the keys to the continent's development and for connecting it with the world.

As soon as he graduated in Nanjing, Terimbere returned to Burundi to find a job and make a contribution to his home country's development, but found it difficult, despite his qualifications and experience.

"I had to go to neighboring Rwanda to see if there was any chance there, because they are more incorporated within this region," he says.

Ironically, the work he found as a consultant at the China-Rwanda Agriculture Technology Demonstration Center was more due to his Chinese language skills than his software ones.

"I met an economic and commercial counselor from the Chinese government in Rwanda while waiting in an official's office, and he was impressed by my language and understanding of China, so he introduced me to the center," he says.

"I was a report analyst responsible for writing reports in Chinese for investors intending to invest in Rwanda."

But after only a month, he decided it was more important to focus on what he had learned about IT in China and use it to transform his own country. So he went back to Burundi and started up his company.

So far, so good, and the future looks promising. There have been sufficient orders from various sectors for him to believe that his business and country will grow.

"I have clients from government and private sectors now," he says. "Our main task is to develop management information systems for database applications, such as membership, employees, students and hotels. Mostly I specialize in customizing solutions based on clients' different needs."

He says he has built a system to manage a church's finances, including donations, membership management, sermons, prayer groups and church reports.

From his time in China, Terminbere says he appreciates the attitudes that Chinese hold toward life and work.

"In Chinese culture, working hard is the most important thing in life, and we must believe that sooner or later it pays off when you work hard," he says. "Most of the things I am doing and principles I am following I learned in China, either through what my professors taught me or what I researched. Everything is connected somehow." Conditions are more demanding with a lack of facilities in Burundi, so Terimbere believes he needs to remain dedicated.

"I'm doing anything possible to make my business successful and come up with a feasible plan for the future."

But more importantly, he says, his experience gained in China, and that of the Chinese IT industry in general, must be transferred.

"I would give jobs and training to young and creative Burundians and at the same time develop my country," he says.