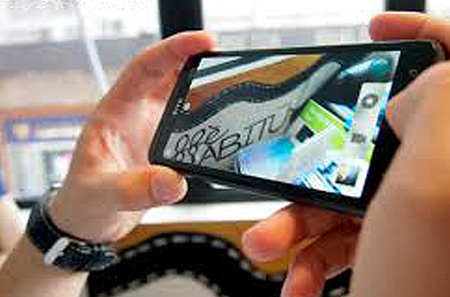 Cao Kai finds it hard to fall asleep, and his eyesight is worsening.

Cao blames it on his smartphone, which the 28-year-old white-collar worker feels compelled to check for updates on microblogs and other social networking applications.

His solution? Cao has made it a rule to turn off his phone's 3G network at 10 p.m. in order to cut himself off from the virtual world.

Cao lives in Jinan, capital of Shandong Province, where he said life after work pales in comparison to the bustling nightlife in big cities, like Beijing or Shanghai.

His smartphone, loaded with a few social networking apps, promises fun and spices up an otherwise uneventful night.

Cao is among many smartphone owners across the country who find themselves glued to the screens of their iOS, Android or WP-based handsets.

More than 77 million smartphones were sold in the second quarter of this year, accounting for 85.3 percent of total mobile phone sales, according to a report released Wednesday by Analysys International.

The increasing popularity of such handsets in China has spurred new concerns about the potential impact of smartphone addiction.

"As we get addicted to our smartphones, we spend less time socializing with people in real life, get distracted from work, and feel tired from staring at the screen for too long," Cao said.

Some Chinese netizens have even compared the handset obsession to smoking opium in order to raise alarm over the growing reliance on smartphones.

But hi-tech device consumers in China, home to the world's largest number of smartphone users, totaling 380 million at the end of 2012 according to Internet consultancy iResearch, are unlikely to give up its latest obsession.

Apps like the Twitter-like microblog Sina Weibo and instant messaging service WeChat are all seeking to engage their users on a deeper level.

The latest version of WeChat, for example, has introduced interactive games that allow users to compete against each other for top scores.

In one extreme case, a woman in Zhejiang Province played a WeChat game for so long that she hurt her thumb joint, according to local news reports.

Meanwhile, the Chinese government hopes to tap the handset boom and IT-related consumption in an effort to steer the world's second-largest economy toward a more consumption-driven growth model.

At an electronic mall in Jinan, Hou Min was looking for a new smartphone to replace her older model. As she walked down an aisle, dozens of smartphone vendors jostled for her attention.

"This will be my second smartphone and these gadgets are becoming increasingly convenient to use," Hou said.

Recent research by media investment management firm GroupM shows 66 percent of those interviewed in China have broken up with significant others over the phone, 91 percent prefer to check the time on their phones instead of a watch, and 73 percent have used their phones to scan matrix barcodes.

The research also finds that a whopping 95 percent of respondents said they spend an hour on average with their smartphones before going to sleep.

Xu cited Micro Love, an app he helped develop, as an example. The application offers messaging solutions for couples separated by distance.

"Smartphones shouldn't be made the scapegoat for the problems we have," Xu said. "Users should exercise self-restraint and use their phones wisely."