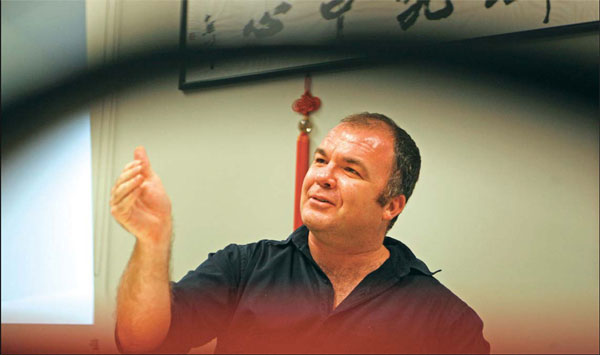 Ross Anthony says that China gets unfairly criticized for its role in Africa. Mark Wessels / For China Daily

Ross Anthony believes accusations in the West that China is a new colonial power in Africa are a form of racism.

The 36-year-old South African academic insists it is "hilarious" that the actions of Chinese corporations and businesses are conflated into some "grand state strategy".

"If BP does something dodgy in Nigeria, nobody says that is 10 Downing Street's fault and David Cameron organized it all. But they do that with China.

"It is actually a form of racism. People actually want an enemy and China fits the bill. It is not rocket science to see that."

Anthony was speaking in a seminar room at Stellenbosch University in South Africa's Western Cape province, where he is a research fellow at the Centre for Chinese Studies, the only such dedicated center in sub-Saharan Africa.

The South African academic, who partly specializes in global security issues including threats to the environment, does not, however, regard China's economic involvement in Africa as completely benign.

"The reason why China is here is because they have joined the global economy. They pull stuff out of the ground, manufacture it in southern China and ship it globally, particularly to America, and then it is sold on the shelves of Wal-Marts," he says.

"This global consumption capitalist lifestyle is putting pressure on global resources and causing environmental problems, which are becoming a greater issue. So my take on this is that anxieties about China and Africa just obscure what the real problem is."

Anthony, who was born in Durban but brought up in Johannesburg, returned to South Africa last year from Cambridge University, where he completed a doctorate in social anthropology.

A China specialist with a particular focus on studying Northwest China's Xinjiang Uygur autonomous region, he might have taken up a position at Oxford specializing in Islam in China instead.

"It was flattering. I went to some interviews and they called me back. It was a nice gig but I pulled back because I felt if I went deeper into Islam and Xinjiang, I would become stuck with that.

"Here there's so few people with expertise on China, there is no real space for specialization. People phone the China Center and expect you to know everything from republican politics and the Ming Dynasty to Africa trade. I quite like that. It is far more exciting to be here. You have to know about everything."

Anthony, whose languid manner only thinly disguises his sharp intellect, says that as an area of study the China-Africa relationship has grown almost exponentially over the last decade.

"In 2000, there was probably a few lone people studying the relationship but now there are institutions devoted to it, magazines and all various kinds of media set up based around it," he says.

Anthony became interested in China by chance shortly after taking his first degree in art history at the University of Natal in Pietermaritzburg.

"I went to London and did a few arbitrary jobs in order to get enough money to go hiking in the Karakoram mountains in Pakistan. After a few months there I crossed the border and came to Xinjiang. I had no real interest in China but this just blew me away," he says.

After doing a master's degree in English literature at the University of Cape Town (where he admits to reading only books on China and not syllabus novels, such was his new interest) he returned to China, ending up as a lecturer in English at the National Dong Hwa University in Taiwan.

He then won a Bill and Melinda Gates Scholarship, which enabled him to study social anthropology at Cambridge, both for an M Phil and a PhD.

His doctorate focused on how political events since the Qing Dynasty (1644-1911) had impacted on the urban space of Urumqi, the capital of Xinjiang.

"I was looking at the interface between politics and urban development and how the various political regimes since the Qing Dynasty had affected the social organization of the city."

Urbanization remains one of Anthony's strong research interests at Stellenbosch and he believes the Chinese are different to many Africans in seeing city living as some form of ideal lifestyle.

"If there is a vision of contemporary China, what you might call a collective fantasy, it is urban.

"It is unlike Africa. We are constantly moving from the countryside to the city and back. The exception in China might be Uygurs. When they retire, they too want to move back to a nice house in the countryside."

Anthony says the Chinese are beginning to export some of their urban planning ideas to Africa, particularly in such areas as the Chinese Eastern Industrial Zone near Addis Ababa, where a number of Chinese companies are based.

"As soon as you enter these zones it is like entering a slice of modern China from the way the flower beds are organized and all these slogans put up on the walls."

Anthony does not think these Chinese zones will prove successful in the long run.

"When I first visited one, I thought they might be a possible future model for African development but they are no longer flourishing. There are a lot of issues and they are not taking off. There are five or six across Africa now and by the time I die I doubt whether there will be 50 or 100."

Anthony believes that generally China gets unfairly criticized, for its role in Africa.

"I think China has got a ridiculously bad rap in term of its presence in Africa. It is shameful the way the West covers this, especially the left-leaning newspapers."

He believes that the Africa market might be more open to China because it doesn't have the colonial baggage some Western countries have.

"They came in the Ming Dynasty (1368-1644) and they didn't do anything. They left and took just a few giraffes. They didn't colonize, although they did take African slaves to Guangzhou."

He insists that while China's role in Africa is not a colonial one, the economic relationship has an inevitable imbalance.

"I think colonial encounters involve taking more than giving and I think it is just the same with China. You almost have to take more than give, otherwise it is not a sustainable relationship," he says.

"The Chinese, have done some brilliant things here, however. You have only got to go to Angola to see the transformation that has taken place by the construction of infrastructure."

Anthony says there is very little difference between China's involvement in Africa and that of the West and it is in large part just about the spread of global capitalism.

"I think anxieties about this (China's involvement in Africa) are misguided," he says.

"China is sometimes presented as some enemy but actually it is a country very much integrated into the global economic system. As such any differentiation between China's engagement in Africa and that of the West is a false one."