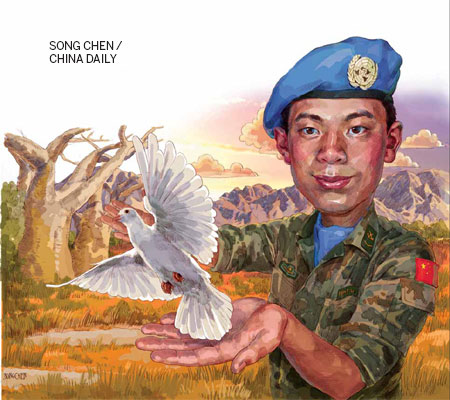 With only a few international flights landing and leaving from Harbin, the capital of Northeast China's Heilongjiang province, the city's international airport usually remains quiet. However, on Dec 3, the departure area was bustling with activity as a 135-member Chinese peacekeeping force left for Mali, including 35 engineers, 65 medical workers and 35 soldiers, to join the United Nations Multidimensional Integrated Stabilization Mission in the African country for eight months.

The Chinese peacekeepers, all from a Harbin-based contingent, will be tasked with repairing roads and bridges, keeping peace and stability, and providing medical assistance. This is China's 30th UN peacekeeping mission since 1990.

So far, more than 25,000 Chinese military personnel, police and civil affairs officials have participated in UN peacekeeping missions in 10 mission areas, making China the biggest contributor to such missions among the five permanent members of the UN Security Council.

However, this is the first time that China has sent security forces on such a mission.

According to the Ministry of National Defense, the Chinese security force will mainly guard the MINUSMA headquarters and the living areas of peacekeeping forces.

"The Chinese peacekeepers will abide by UN peacekeeping regulations and play a constructive role in safeguarding peace and stability in Mali and the region as a whole," says Yang Yujun, a spokesman for the ministry.

China provides more peacekeepers to the UN than all four other permanent members (of the Security Council) combined, says UN Secretary-General Ban Ki-moon. "I applaud this solidarity."

Ban visited Chinese peacekeeping troops in Lebanon in 2007 and 2009. "I have seen the bravery of Chinese blue helmets in helping struggling communities around the world," he said.

"China is a rising country in terms of political profile and economic development that also requires corresponding responsibility for world peace and development. And I count on China's continuing contribution."

The mission in Mali was established in April this year to support the transitional authorities of Mali in the stabilization of the country and implementation of the transitional roadmap, focusing on major population centers and lines of communication, protecting civilians, human rights monitoring, the creation of conditions for the provision of humanitarian assistance and the return of displaced persons, the extension of state authority and the preparation of free, inclusive and peaceful elections.

A couple of months later, the UN requested Chinese troops for the mission. The Peacekeeping Affairs Office of the Ministry of National Defense says there are three major reasons why the UN wanted Chinese troops to operate in the newly established mission.

"After 20 years of work on UN peacekeeping missions, the PLA has established mature management mechanisms and gained valuable experiences." 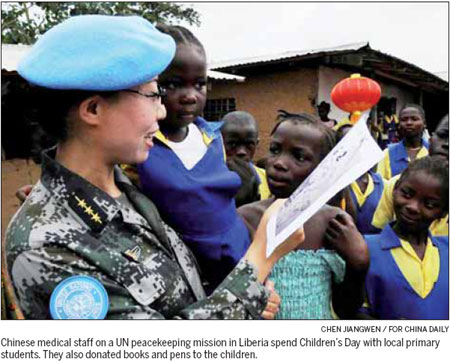 In 1981, the Chinese government expressed its support in line with the spirit of the UN Charter of peacekeeping operations.

From 1992 to 1993, about 800 engineers from the PLA joined the United Nations Transitional Authority in Cambodia, becoming the first organized Chinese troops to go on peacekeeping missions.

China's involvement in UN missions has since grown, and the mission in Mali includes the first PLA security forces for peacekeeping.

On Dec 17, the first squad of the ninth peacekeeping contingent assigned for an eight-month United Nations peacekeeping mission in Sudan departed.

The 105-member squad is mainly comprised of engineers, guards and medical staff from the PLA Jinan Military Area Command, which has participated in the Sudan peacekeeping mission four times.

The peacekeeping experiences has helped in the PLA's development also, the Defense Ministry statement says.

"Most of the missions are undertaken in tough conditions and environment, and hence are good experiences for enhancing the army's capabilities," the statement says.

"On the other hand, it is also a great opportunity to stay in touch with other armies, and to gain good experiences from other troops."

To adapt to the hot climate and the grim security situation, Zhang Geqiang, head of the contingent bound for Mali, says his team had to undergo special training programs for boosting physical and psychological capabilities. The security forces also underwent exercises such as anti-terrorism drills and handling large public events.

The rigorous training program undertaken by the Chinese contingent also got a special word of appreciation from UN peacekeeping chief Herve Ladsous. During a trip to China in October, Ladsous inspected the troops in Harbin and said the Chinese peacekeepers were the best he had met, Xinhua News Agency reported.

Ladsous said the situation in Mali is very unstable with extremists rampant in the region, so the Malian government needs help from the international community to restore law and order.

The troops to Mali are also equipped with Chinese-designed and manufactured military equipment, a major difference from previous missions.

About 98 percent of the medical equipment being carried by the 65-member medical team has been made in China.

"When I was working in Congo in 2005 as a peacekeeper, we had to use foreign equipment for medical check-ups," says Liu Wei, the doctor-in-charge of the medical crew.

"This time, most of the equipment is from China, and it makes it easier for us as we are familiar with it. Some of the equipment, such as the Chinese army ambulance, can protect the medical crew and also improve work efficiency," he saya.

More Chinese service persnnel are expected to head to the African country early next year, with nearly 400 Chinese personnel expected to work on the Mali mission.

Li Shuxiang, a 27-year-old sergeant who has served in the army for eight years, is one of those who is going to Mali.

"I didn't think much before I applied for the peacekeeping mission," he says. "I just felt a sense of honor."

Family members of the troops heading overseas cannot help but worry about them.

Yang Wenhua and his wife registered their marriage on the morning of July 1, and the young man's application to Mali was approved in the afternoon.

Yang's busy training schedule prevented the couple from holding a wedding ceremony, but his wife understood and supported him.

"She kept crying and crying in the last two days before our departure, but she still wants me to be the best in the team and serve the mission in Mali successfully," Yang says, adding that his wife had packed his luggage for him.

The new bride waited at the airport until the lights of the peacekeepers' flight disappeared into the dark night.

"I will give her the best wedding ceremony next year, after the mission," Yang says.